Cora is the main antagonist of the episode "D.W. Thinks Big". She is the cousin of Arthur, D.W. and Baby Kate.

In "D.W. Thinks Big," Cora arrives for a sleepover at the Read household to prepare for the wedding of her aunt Lucy the next day. In D.W.'s room, D.W. asks Cora if she wants to play with her doll, Madame Curie, but Cora is unimpressed by it, calling it "baby stuff" and says she doesn't have time to play anyway as she has to prepare for the wedding since she's the flower girl. While checking her supplies, Cora shows D.W. a golden heart-shaped locket that Lucy gave her as a thank-you present for being the flower girl. D.W. tries to touch it, but Cora tells her she can't because it is made out of real gold, and then unintentionally breaks the locket by pulling on it. Cora then acts like it was D.W.'s fault, claiming that she made her do it and goes to tell her mother that D.W. broke it. When Jessica tells D.W. sternly, she says she didn't do it, but Cora argues back saying that she did and ruined it. Cora and D.W. are then sent to bed by Jane, and Cora asks Jessica if she can sleep with her because she thinks the colors in D.W.'s room are awful, but Jessica tells her she is just tired.

The next day, Cora is given her flower crown for the wedding and her father takes a picture of her in her wedding outfit. At the wedding, she rudely reminds Arthur that if he makes a mistake, he'll ruin the wedding. While Arthur and Cora are walking down the aisle (Arthur is the ring bearer), Cora rudely yells at him to smile, which startles him and causes him to lose his balance, and as a result, the ring flies into the air and lands inside one of the organ pipes. Grandpa Dave tries to pull it out but is unsuccessful. The organ player, an elderly female rabbit, then points out that if someone could fit into the small hatch on the side of the organ, they could go and retrieve the ring. Arthur tries it out but it turns out he is too big to fit. Dave then asks Cora to give it a shot, which she is about to do, but then backs down when she sees that the inside of the organ is dirty, and rudely asks if they can just get another ring instead, to which Jessica answers affirmatively and tells her that she doesn't have to go into the organ. The wedding attendees then go into a panic, until D.W. volunteers to go retrieve the ring. While D.W. is inside the organ, Cora is seen watching in astonishment along with David, Jane, Arthur, Dave and the organ player. After D.W. gets the ring back, Cora is stripped of her flower girl position by Lucy and it's given to D.W. instead, which Cora isn't happy about, but Lucy says her name warningly and she begrudgingly accepts it.

Cora is last seen near the end of the episode among the crowd waving outside Lucy and her husband's wedding car.

In Brain's dream where he's a bug, Cora is seen at Lakewood talking to Nancy. "Bugged"

When Grandma Thora is shopping for her birthday, she decides to buy Arthur the Mutant Muck Monster as a present. "Arthur's Toy Trouble"

Though she only has one major appearance in the series, Cora is portrayed as being spoiled, annoying and rather rude to the Read family children, especially D.W., but acts like a little angel when the adults are around. Her bratty nature is later exposed at her aunt Lucy's wedding.

Cora is an aardvark with a light brown complexion. She wears a blue short-sleeved dress with green stripes at the bottom and on her sleeves, long white socks, and red-and-white sneakers just like Arthur's sneakers. She has short brown curly hair. She wore a lavender dress with puffy sleeves, beige pantyhose and white shoes to the wedding since she was the flower girl. 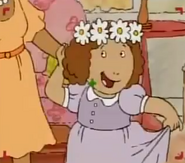 Cora as the flower girl

Cora rudely gives her cousin Arthur a stern warning that making a mistake ruins the whole wedding, so to watch it.

Cora being stripped of her flower girl position by her aunt 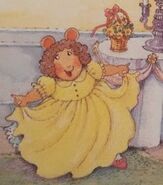 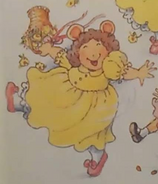