Even though the city is a parody of NYC, Arthur Read and his family went to New York City with Buster and Bo Baxter in the pilot episode of Postcards from Buster. Buster also went to New York two other times in his spin-off series.

The kids sing a song about Crown City in Muffy Goes Metropolitan, with the lyrics

You're peaches and cream

Crown City! One heck of a diamond by the sea!

Crown City first appeared in Muffy Goes Metropolitan. It is located near an ocean according to the song, but it has a bridge similar to the Brooklyn Bridge. It has its own professional baseball team called the Crown City Kings, that played the Elwood City Grebes in the World Series, and also a Crown City hockey team that played against the Elwood City Otters in the playoffs at the end of the episode Bitzi's Beau.

The architecture in Crown City.

A bridge in Crown City, a parody of the Brooklyn Bridge

The view of Crown City in the evening.

A building similar to the Empire State Building can been seen in the background of this picture.
Add a photo to this gallery

Crown City has its own subway. In the subway, there are performers and food stands. 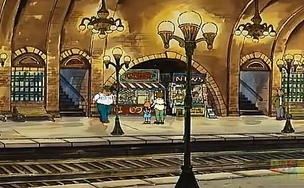 The Crown City Subway, the first station, built in 1903 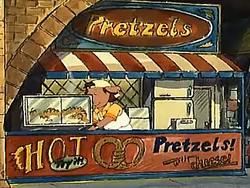 Crown City, well known for their pretzels filled with cheese
Add a photo to this gallery

In Comparison to Elwood City

Some episodes portray Elwood City in a different light compared to Crown City. Muffy Goes Metropolitan portrays it as a grand city, much larger than Elwood City and referred to as a place for weekend vacations. Other episodes, such as The Long Road Home portray Crown City as simply a sister city to Elwood City. Some have speculated that Elwood City might be a suburb of Crown City.

Retrieved from "https://arthur.fandom.com/wiki/Crown_City?oldid=387563"
Community content is available under CC-BY-SA unless otherwise noted.