D.W.'s Guide to Preschool is a D.W. picture book that introduces young readers to preschool. It shows D.W. going to her preschool and what happens once she gets there. It offers reassurance on topics such as learning (D.W. was worried because she couldn't read), going to the bathroom (she was worried that there might be no restrooms) and things such as snacktime and sharing.

The title was later reissued in paperback as D.W. Goes to Preschool.

D.W., Arthur's fun and sassy little sister, is here to help every new preschooler get through the first day. From naps to snacks to playtime, here's a helpful and hilarious guidebook to this very important rite of passage. (From the jacket flap of the original edition)

A classic D.W. adventure. D.W. loves going to preschool! Follow Arthur's fun and playful little sister from sharing blocks and class pets to field trips and story time, and find out why preschool is the greatest!

D.W. greets readers as she attends a day at her preschool. She says goodbye to Mom, explaining that it's no big deal because the parents come back when they're finished. The Tibble Twins, however, are shown bawling over Mrs. Tibble leaving. D.W. says hello to the class gerbil, Speedy. She introduces readers to the teacher, Ms. Morgan, who she calls "really nice." She is shown washing her hands and explains that they have bathroom breaks whenever they need them. She also mentions that once a boy named Dennis wet his pants, but she pretended not to notice because they're learning to be polite. She explains that they're learning about sharing, but the Tibbles have trouble with this. She moves on to circle time, where sometimes they learn songs like "The Wheels on the Bus," even though they can't take the bus until they're in kindergarten. The class is shown having a party for Emily's birthday, as D.W. explains that they have food at preschool. They're allowed one thing that they don't have to eat, and hers is tomatoes. They go outside to play, the Tibbles having trouble taking turns. They learn numbers, D.W. being able to count to 7, and Tommy claiming to be able to count to a hundred, though nobody's ever heard him do it. They are shown learning their letters, D.W. explaining that she was worried that they would have spelling tests, like her brother, Arthur. They go on a field trip, D.W. saying that she got lost once and had to have her name announced on a loudspeaker at a supermarket. They pick partners on their trips so they don't get lost. They play games back at the school, make presents for their parents, and have storytime. D.W. says that she hasn't found any books yet that are like tomatoes for her, that she likes them all. They then clean up, greet their parents at the end of the day, and say goodbye. She's not sad, because she knows she gets to do it again tomorrow. 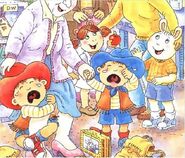 The Tibbles, bawling over having to leave their grandmother

D.W. with Speedy, the class gerbil 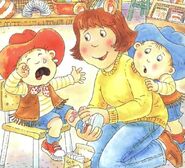