View source
watch 01:39
Hawkeye Is Here To Amaze - The Loop
Do you like this video?
Play Sound

"D.W.'s Name Game" is the first half of the nineteenth episode in the second season of Arthur.

The name-calling contest between Arthur and D.W. improves their vocabularies, but gets a little out of control.

The episode begins as D.W. has cereal for breakfast, greeting the viewers in Arthur's place. She discusses why he is, in her opinion "the worst big brother in the whole world," she has a flashback about Arthur being too fast when they ride bikes, leaving her behind. She said she would be as fast as him if she was big enough, then she said she could only do that if she ate as much as Arthur, showing him devouring a whole cake in one bite. When she kept going into his room behind his back, he put up a sign that says she was not allowed in; except she can't read. Arthur then uses up the last of the milk leaving D.W.'s cereal tasting badly. She insists she will get even with Arthur somehow.

After the title card, she is talking with The Tibbles on how she should teach him a lesson. Tommy Tibble says that she would show up late at his concert and distract him when he grows up to be a famous pianist. Then Timmy Tibble said that would be "dopey", and says she should make him her servant. Tommy said she has to hypnotize him first. D.W. thinks these ideas are terrible, prompting the Tibbles to call her names until she returns the insult. Impressed, they suggest she do the same to Arthur. D.W. imagines her hypnotizing Arthur with swirling lines on his glasses and says "I enjoy doing your chores" and then he says again as he dusts off her doll.

That night Catherine babysits for the kids while their parents are out, and the two are relaxing in the den until Arthur complains that D.W. is in the way of the TV. When she calls him names, he wastes no time firing back, leading both to continually insult each other as Catherine insists they remain separate. When Arthur goes into D.W.'s room demanding one of his crayons back they continue insulting each other until Catherine breaks it up. Frustrated that Arthur has better insults than her, she asks Catherine to look up some words for her in the thesaurus to use against Arthur. Catherine obliges as she sees it as them working on their vocabulary.

The two continue to throw insults at each other at every turn using words picked up from their chats with Catherine. The two are at a stalemate until Arthur finally calls D.W. by her full name "Dora Winifred," which she cannot stand to have repeated to her. D.W. pleads to have him stop as he taunts her with it, finally prompting Catherine to announce it's bedtime. Arthur watches D.W. groan in defeat as Catherine takes her to her room then snickers in victory when they're out of sight.

D.W. dreams that she's in a paradise fully of happy flowers and trees who take her in as their friend and they squirt purple flowers on her pjs until Arthur, dressed as an evil wizard, wreaks havoc on her fantasy with repeated taunts of "Dora Winifred". Distressed, D.W. runs away, until Walter the Deer arrives and advises that she see the great "Thesaurus" to help her beat Arthur. Learning he lives beyond the woods in the Elwood City Library, she simply jumps into the picture Walter shows her of it as walking the woods would've been boring. She's surprised to find Tommy and Timmy turned into stone lions by Arthur, and warn her to run inside when he comes back to cause more trouble.

D.W goes inside the library and asks where "the saurus" is. She goes through lots of isles and sees the saurus as a dinosaur because of the name with "saurus" in it. He says D.W has to prove herself worthy for the perfect name to call Arthur. She must name three synonyms for silly. She says "silly," "goofy," and "Arthur," to which he whispers the perfect name to call Arthur. Finding him outside, D.W. whispers the insult to him, which catches Arthur off guard and causes him to melt. Horrified and unaware that this would happen, she scoops up Arthur as he washes into a storm drain, who sadly proclaims that calling people names does little good for anybody. Regretting her wish, she begs someone to help her.

Then she wakes up when mom and dad are in her room. She sees them holding the cup Arthur melted in from the dream and yells his name. He walks in to see what all the commotion is, to which D.W. hugs him and apologizes for all the things she called him. He returns the apology and D.W. tells him and her parents about the dream she had. Suddenly, "The saurus" himself appears outside their window, making D.W. realize it may not have been just a dream. 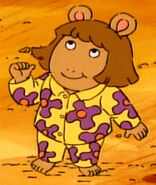