"D.W.'s Very Bad Mood" is the second half of the eighteenth episode in the second season of Arthur.

Arthur and Francine try to find out why D.W. has been in a bad mood for days on end.

In an alternate telling of his everyday existence, Arthur (in an obvious "Leave it to Beaver" parody) describes how great it is to have a perfect life: two loving parents who make sure all his needs are quickly met, a spacious, comfortable house (reimagined as a mansion) and good friends (Francine and Brain) who go with him to a great school where they're never late.

Arthur is quite contented with his life, except for one thing: D.W.! Imagined as a ferocious giant, D.W. chases Arthur and his perfect family away and wreaks havoc on Elwood City in Godzilla-like fashion, sending everything into pandemonium as she takes out her latest temper tantrum on the innocent people of Arthur's idealized hometown. But, it turns out to be a nightmare that Arthur had.

Arthur is baffled because D.W. has been in an especially bad mood that has lasted for days, yelling and ranting against everyone around her and not wanting to do anything she's told. At the Sugar Bowl, Francine invites her friends to her birthday party, but Arthur is exhausted and says he can't attend. Francine mentions that the party is two weeks away, and Arthur tiredly replies that D.W. kept him up the entire night screaming at everyone and slamming doors around the house. Francine tells Arthur he should ask his sister what's wrong, and he counters by saying Francine should do it. After a moment's thought, she agrees to try.

That night, Francine comes over for dinner with Arthur's family, but matters quickly turn unpleasant when D.W. snaps at Mrs. Read for scolding her about her less than polite table manners (consisting of reaching across the table to get to the French fries, and grabbing more than one fry at once and shoveling them into her mouth). D.W. is about to launch into a rant against Arthur when Francine politely asks D.W. what's wrong with her. Shocked, D.W. runs off in tears, making Francine groan and Mrs. Read sigh.

Francine excuses herself to try to settle problems over with D.W. upstairs. She explains to D.W. that she didn't mean to hurt her feelings, but something had to be done because D.W. has been acting so strangely, and as Arthur's friend, Francine wants to help when something is bothering him. D.W. doesn't accept Francine's explanation, and exhaustively tells her to leave.

The next day, Arthur is in a state of nervous aggravation because D.W. spent much of the previous night slamming doors around the house. Arthur and his friends imagine a show called Tantrum 911 (Temper Tantrum Patrol Squad), in which the police apprehend children engaged in temper tantrums. In Arthur's vision of the show, the police try to arrest D.W., but her temper is too strong, forcing the officers to call for backup. Returning to reality, the kids discuss how to solve the problem. Francine has the feeling something is really bugging D.W., but Arthur can't believe a four-year-old would have any reason to be so upset.

That afternoon, Francine and Arthur spy on D.W. from the tree house as D.W. is eating lunch outside. They see her eating a sandwich but spitting out the bologna, which Pal proceeds to eat. Arthur yells for Pal to not do that because it's gross, but in doing so accidentally blows their cover, and D.W. tells them off again.

That night, Arthur spies on D.W. sleeping in her room, and Francine listens in on a walkie-talkie. As Arthur relays that his sister is mumbling "something's wrong" supposedly in her sleep, D.W. sits up, yelling "because Arthur is a dodo brain!", which Arthur automatically repeats into the walkie-talkie without thinking. Francine laughs, and Arthur tells her to cease it.

The next day, Francine and Arthur watch D.W. and her classmates being released from preschool. D.W. appears to be looking at a small group of kids from her class talking among themselves, including her classmate Lisa. The group is discussing Lisa's upcoming birthday party at the movie theater.

Francine catches on to the situation, and later that day pays a visit to Arthur's house to talk to his troubled younger sister. D.W. once again reacts sarcastically toward Francine, but her bad behavior is curtailed by her mother. D.W. admits she would feel much better if she could see Quazy Kool Kittens: The Journey Home at the movies, and Francine says she and Arthur will take her to it.

At the theater, D.W. doesn't seem to be having fun until she sees Lisa and her birthday party guests arrive, and then she starts laughing almost maniacally. Lisa greets D.W. with disinterest, and D.W. boasts loudly about all her own good friends, and how she gets invited to lots of birthday parties. Lisa says that's nice, but soon it appears she and her party friends (among them Emily) are intentionally leaving D.W. out. Claiming she feels sick, D.W. asks to go home as the movie is just starting, a suggestion to which Arthur readily agrees. Finally realizing what has been bothering D.W., Francine informs Arthur that she's going to take just D.W. to the Sugar Bowl for ice cream, giving them some time to talk alone.

At the Sugar Bowl, Francine explains to D.W. that the latter shouldn't feel bad or left out just because she wasn't invited to Lisa's birthday party. Initially, D.W. denies it, but then she finally admits that her recent bad behavior was because, as Francine has figured it out, she felt terrible over not being invited to Lisa's party. She then fantasizes about enacting revenge on Lisa and her friends by ruining the party, and asks Francine if she might be able to help with the plan. D.W's revenge fantasy involves her flying a blimp to Lisa's party and ruining it by making it "rain on their little parade". By that, she would activate a shower head which would make it rain so hard on the party that the colors of everything and everyone would be washed away, including the trees, ground, cake and the girls.

Francine doesn't care for the idea of revenge but admits that she can understand how D.W. feels about being left out of something, though this makes D.W. think that Francine's not on her side. But when Francine asks D.W. on how close she and Lisa actually are, D.W. ultimately admits that she and Lisa aren't really all that close (at least not close enough to really be considered “friends” in a sense). As it would seem, the main reason that D.W.’s mad about not being invited to Lisa's birthday party is how D.W.’s best friend, Emily (who’s much closer to Lisa than D.W. is), was invited, but not D.W. herself. Francine explains that not everyone can be invited to every party, but says she has an idea to make D.W. happy again; D.W. follows her, asking what it is.

The next morning, D.W. receives a letter in the mail, which she has her mom read to her. It is an invitation to Francine’s birthday party. D.W. is thrilled and her bad mood immediately lifts; she says, “This is better than Lisa’s party! This is a third-grade party!”

All is finally well again, and Jane says, “What a nice friend Francine is.” However, Arthur is less than thrilled to be bringing his sister to his friend's party.

Arthur is tired due to lack of sleep from D.W.'s night time "tantrum"

Jane is irritated with D.W. and fed up with her bad behavior 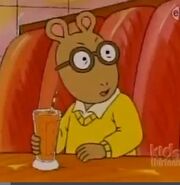 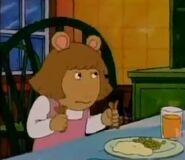