D.W. All Fired Up

"D.W. All Fired Up" is the first half of the second episode in the third season of Arthur. It was later adapted into the book Arthur's Fire Drill.

Ms. Morgan announces the preschool will be having a fire drill. D.W. is not sure what that is, but it sounds scary, so she concocts a plan to stay home from school every day until the danger passes.

Jane wakes D.W. up in time for school. D.W. finishes her breakfast quickly and wants to go immediately and gets word that there's plenty of time to wait. Arthur tells the viewers that D.W. loves school, from going down the slide to singing "Old MacDonald Had a Farm" to eating pumpkin muffins. He thinks that D.W. finds it her favorite thing in the whole world. Arthur also says that one time, D.W. thought that school was not as good as she expected. When D.W. goes back home one day, she complains to herself about not wanting to go to school anymore.

D.W. All Fired Up

D.W., Emily, the Tibbles, and the rest of D.W.'s preschool class are playing with toys, messing about, etc. when a teacher pops in and talks to Ms. Morgan for a minute. After he leaves, Ms. Morgan explains to her students that over the course of this week, they will be learning about fire safety and at some point (she does not specify when) they will have their very first fire drill.

However, D.W. almost immediately discovers that a fire drill is not anything like what she thinks it is: Ms. Morgan explains that a fire drill is a special plan that they will follow if there is a fire in the building. The preschool class practices lining up for the impending drill, goes out and practices "stopping, dropping, and rolling" (a technique that the Tibbles tell D.W. she should do if her clothes caught fire). The Tibbles, thinking real fire will actually be involved, relish the thought of having a fire drill with a great deal of sadistic glee... except D.W.

She does not want to be in the school if it is going to catch fire, and so D.W., who usually loves going to school, decides that she will have no part of this.

That night, D.W. wakes up, and looks up at the smoke detector in her room. She then tests it by poking it with a broom, so that it starts going off. Then she goes around the rest of the house, setting off the other smoke detectors. Jane and David rush downstairs, half asleep, (since it's the middle of the night) and tell D.W. that smoke detectors are not toys, and she should not be messing with them unreasonably.

Back in bed, D.W. continues to worry, and has a nightmare where she can not escape from her bedroom, because she is suddenly very tiny. When she manages to get out of her room, she finds that it is not her regular hallway— it is the school hallway, catching on fire! The firefighters are the Tibbles! They laugh, repeatedly shout "Fire Drill, Fire Drill" and run off into a big cloud of smoke.

D.W. fakes feeling ill at breakfast the next day in an attempt to miss the fire drill, but Arthur is pretty sure that she is faking. When Jane says that D.W. can stay home for the day because she was up all night setting off every smoke detector in the entire house, Arthur asks if he can do the same, because he was woken up by it, too. Jane knows that Arthur has a math test today, so Arthur has to go to school.

D.W. spends the day at home with Nadine and sees the Tibbles walking home that afternoon. She asks them if anything important happened today. The twins tell her the class did some coloring and glued some sticks together. Also, D.W. realizes that there was not a fire drill. Her subterfuge did not work then; she will have to face the fire drill eventually.

When her mom drops her off at the school, D.W. is still a little concerned about the impending fire drill, and is reluctant to leave the car. Jane asks if D.W. will be okay at school, and D.W. says yes. As D.W. walks up to the school, Nadine tells D.W. that, if she had wanted, Jane would have come into school with her, but D.W. replies that Jane's "too nice" to have to suffer through the "crazy fire drill stuff."

In class, Ms. Morgan asks if anyone has seen D.W., since she has not come into class yet. The Tibbles think that she's "probably playing hockey" ("playing hooky", corrects Ms. Morgan). Then they spot D.W. hiding outside the classroom window. D.W. says that she will not be part of the "insanity."

Back home that afternoon, Jane tells David the situation, and then, to quell D.W.'s fears, David has a surprise for her: a special firefighter's hat with "D.W." painted on it. Jane and David tell D.W. that she is going to be the Read family's fire warden.

D.W. then tells Arthur to go back to his cell! (Not that kind of warden, they tell her.) D.W. is going to be responsible for ensuring everyone's fire safety.

D.W. starts to patrol the house. The family practices home fire drills, and tests out a fire-escape ladder. Later, D.W. notices what looks like smoke coming from the bathroom. She opens the door to find out it was just Arthur steaming up the bathroom by having a shower. She tells him she wants his wet towel when he is done. Later, she sits watching TV with the wet towel, because a wet towel is a good thing to have in the case of a fire. Arthur tries assuring his sister that it is not like they are going to set her school on fire for the fire drill. He admits to her that he himself was kind of nervous when he had his first fire drill, but explains that everything turned out just fine in the end. D.W. is not convinced, saying that "things have changed" since the "olden days" when Arthur was in preschool.

The next day, on the way to school, D.W. is a bit nervous, being sure the fire drill will be that day, though Jane reassures her, saying it will be like the fire drills they did at home. D.W. just answers with a "Yeah, I know."

All goes smoothly at the school, until they hear the fire alarm going off; the fire drill has begun.

D.W. acts pretty calmly, probably due to all of her additional fire drill duties. She correctly tells Emily to not pick up a load of blocks, but rather to leave everything behind, as the class leaves the classroom under the guidance of the teacher. The Tibbles overreact, acting as if there really is a fire, and some of the other kids are a bit concerned (Emily worries about her crayons melting. James MacDonald says that he has to go to the bathroom. Sarah says that her shoelaces are undone.)

Nadine and D.W. walk through the front entrance of the school, and D.W. is very pleased with herself as she exits. However, not everyone fared as well as D.W.; Ms. Morgan has to calm down Tommy, who is hyperventilating. D.W. is sort of disappointed, in that the fire drill was not such a big deal after all. In fact, she would like to have more drills, such as a "volcano drill", a "tidal wave drill", a "sudden loss of gravity drill", etc.

Back at home, the family wonders if D.W. is "okay" after the fire drill. She answers "Of course... it was just a fire drill." 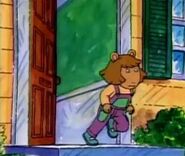