"D.W. All Wet" is the first half of the third episode in the first season of Arthur. It is based on the book D.W. All Wet.

The Reads go to Bear Lake to escape from the summer heat and everyone's having a wonderful time, except for D.W., who won't swim because she thinks there are octopuses in the water.

The episode starts with the Reads, along with Buster, at Bear Lake. David carries D.W., who's crying, screaming, and kicking, yelling at him to put her down. Arthur tells Buster that she has been acting strange and weird since her field trip to the aquarium. The prologue ends with her begging Arthur to save her immediately but she grabs his glasses off his face.

D.W., along with her classmates, are sitting at a bench, being entertained by seals and dolphins at the aquarium. Ms. Morgan says that they will be taking a bathroom break, and then will see the sea monsters inside the aquarium. Inside the girls' bathroom, the girls are taking a long time inside the stall where the toilet flushes by itself. Then, the host announces that they are ready to show the sea monsters. Everyone runs out with excitement.

As the group watches the sea creatures, they get scared, except for D.W. But when a giant octopus shows, D.W. backs away, screaming with fear, while everyone else is amazed. Back at the Reads' house, D.W. tells a made-up story of how she attacked the octopus that she saw back in the aquarium to Arthur and their mother. Jane says that it's getting dark and that it's almost time for bed. Arthur teases D.W., saying that she got scared when she saw the octopus. She denies this, but then gets scared when Pal licks her leg.

The scene changes to D.W. taking a bath in the bathroom. The door opens, which frightens her and when she is not looking, Arthur scares her with a plastic toy spider, hanging by a string on a stick, yelling that it's an octopus. She screams, running out of the tub naked, except for well-placed suds, and hides in her parents' closet. They punish Arthur and send him to his room. D.W. claims that she hopes an octopus eats Arthur, and at night, she dreams, with a smile on her face, that he is being attacked by one.

The next morning, the temperature rises up. Arthur and Buster turn the air conditioner down extremely low and play soccer in the house. D.W. shows up with Jane and David, who don't look pleased. D.W. says the boys are in big trouble. Suddenly, the old air conditioner goes haywire by squeaking and blows up. David says they can't take it anymore and Jane agrees by saying that they had enough. D.W. says that Arthur and Buster are in really big trouble now, but David says what he and Jane mean is they can't take the heat. So they decide to pack their things and head off to Bear Lake, much to D.W.'s surprise.

D.W. refuses to go, because she doesn't want to go in the water since she's afraid that octopuses swim there. Arthur tells her that they live in oceans, not lakes. She is adamant that she is not going, but she is forced to come anyway. David says that he doesn't see any octopuses. D.W. looks around and imagines everyone on the beach turning into octopuses, including Kate, who crawls up to D.W. and grabs her foot. D.W. yells for help, and Kate "turns back" into her original form and starts crying. David says D.W. can just stay with him, Jane and Kate .

Arthur and Buster are about to run into the water, but Arthur realizes Buster doesn't have his bathing cap, which he is supposed to wear to protect his ears. Buster says he forgot it, and will have to go home, but then winks (implying he may have accidentally-on-purpose left his cap behind) and dives into the water with Arthur. Almost immediately, the lifeguard calls for Buster, and brings him his bathing cap, which his mom had sent over by messenger. Buster reluctantly puts it on, but quickly dives under the water when Francine and Muffy come running up towards him and Arthur. He has to emerge soon, however, to catch his breath.

While Buster fills his bathing cap up with sand and tosses it a distance away into the water, Jane finds D.W. hiding in a tent. She reassures her that there are no octopuses on the beach, but D.W. still doesn't want to go into the water. She is, however, bored, and Jane asks that Arthur and Buster play with D.W., if only for 10 minutes. They play a game to save a princess, who is D.W., and they are both embarrassed. 10 minutes pass and they go back into the water.

D.W. asks David if he can make Arthur and Buster stay on the beach, but he says it would be easier if she went in the water. She still doesn't want to. Francine finds Buster's bathing cap and pretends to have an octopus attack Arthur. Arthur splashes around, yelling for help. D.W. freaks out and the lifeguard gives her a ride to Arthur and his friends. The lifeguard says there are no octopi around, which makes D.W. feel better. The children get in trouble with the lifeguard, who says it's dangerous to yell for help unless they really need it, and she demands Buster put on his bathing cap.

In the last scene, D.W. rides on Arthur's back as the sun sets. Jane tells them it's time to go, but D.W. doesn't want to leave because she is having fun. It is almost dark though, so they have to leave. D.W. tells her mother how her day went, and Jane promises they'll come back to the beach. D.W. falls asleep in mom's arms. As they leave, the scene ends with a view of the sun setting over the beach. 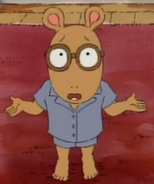 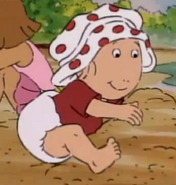