"D.W. Beats All" is the first half of the ninth episode in the ninth season of Arthur.

When the Tibble twins get a set of drums and decide to perform the Summer Serenade Festival, D.W. wishes that she has an instrument of her own to play, and ultimately creates her own instrument.

D.W. discovers that the Tibble twins got a set of drums for the Summer Serenade Festival. D.W. wants to try it out, but Tommy will not let her. After that, D.W. imagines herself having her own giant drum set. In the imagination sequence, the Tibbles are playing their drums when their when the drums are destroyed by the loud volume of D.W.'s drums, causing them to go crying to their Grandma. D.W. continues playing and the sound of the drums causes damage through all of Elwood City while Arthur is playing piano in his house as he cries that he'll never be as loud as D.W. After the imagination sequence ends, D.W. tells her parents they are going to get bigger drums. Jane says no, and D.W. imagines about everybody making fun of her at the Summer Serenade Festival. When she sees Arthur and his friends playing their instruments, she imagines herself playing each one, which amazes them and makes the Tibbles jealous. However, as she tries each one, reality kicks in when she finds out she's either not good or doesn't know how to play them, so she starts to play on Francine's drums in the garage, but she plays them loud enough that Arthur and his friends can hear them from inside his house. Francine says that D.W. almost broke them, and Fern says there's a difference between music and loud noises and Francine plays a solo as an example to show D.W. that you have to practice an instrument so you can be good at playing it.

While swinging Kate on the swing, D.W. laments to herself how she realizes all instruments, even the ones that are easy to make sounds with, like drums, take practice and now she has nothing to play on Saturday. With a little help from Kate, D.W. realizes that she doesn't need a musical instrument, since she heard random noises that sound like music. So she decides to come up with her own type of instrument. She gathers all of the things she needs, some of them being:

Finally, she combines them into one thing and is prepared to go to the Summer Serenade Festival. However, because of the Tibble twins playing randomly, many people are leaving. But when D.W. starts, the audience takes a liking to it. At the end of the song, D.W. shakes the soda can; the soda sprays everywhere, and the timer ends. Everybody is amazed and applauds her; Mr. Haney then tells her they want her to take another bow.

The Tibble twins then want D.W. to teach them how to play her instrument. D.W. offers to give them her bottles, since she plans to make a bigger creation next time (which causes Mr. and Mrs. Read to look at each other in surprise). 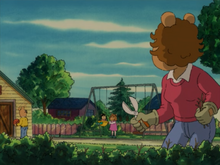