Start a Wiki
watch 01:51
The Loop (TV)
Do you like this video?
"D.W. Tale Spins" is the first half of the sixth episode in the fourth season of Arthur.

The combination of Greek mythology and D.W.'s imagination results in a fantastic tale.

In the introduction D.W. puts on Arthur’s glasses and does an unflattering imitation of her brother. She claims she can do anything Arthur can, but Arthur points out that she cannot read.

Arthur has invited Buster to read Vegemorphs books. He is happy to have something that he does not have to let D.W. join in. D.W. angrily claims that she can make up better stories than in the books. Arthur takes her by her word, but D.W. cannot write.

Grandma Thora tells D.W. how cavemen used to pass on stories by word of mouth without writing.

Arthur and Buster are reading in the treehouse when D.W. comes and tells them the story of the warrior queen O-D.W.-eus.

The queen stole Poseidon’s unicorn, so he crashes her ship on a cliff. The crew, made up of Nadine and some preschoolers, survive.

The next morning the crew, except O-D.W.-eus, eat strange plants that make them forget everything. All are caught by a cyclops (Buster) who takes them to his cave and eats the Tibbles. O-D.W.-eus blinds the cyclops by tying his ear around his head. Then she yells that the crew are escaping. The cyclops opens the cave entrance and they all run out and escape in the cyclops’ boat using his sock as a sail.

When they pass three sirens singing “Crazy Bus”, O-D.W.-eus becomes enchanted and has to be tied to the mast.

Then they have to pass between a monster named Scylla (Muffy) and a whirlpool named Charybdis (Arthur). They toss the cyclops’ sock in one of Scylla’s faces and escape. In sight of their home island the ship is destroyed by lightning from a single black cloud. O-D.W.-eus washes ashore and runs home to tell her friends about her adventure.

D.W. finishes. At first Arthur pretends that the story was not as good as Vegemorphs. D.W. tells him that he cannot recognize a good story, since she was retelling the Odyssey which Grandma Thora told to her. Arthur and Buster ask her to tell it again, especially the parts about Charybdis and the cyclops.

Characters in her Story

Arthur seen through his own glasses 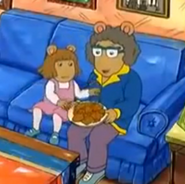 "How did that get there?"

"...and now they didn't wanna go home or do anything worth doing."

"I'm bad with knots, that’s why I don't wear sneakers."

"Don't you even think about coming onto my property!"

"Tell the part about Charybdis! - Not that I really care."
Add a photo to this gallery
Show/Hide gallery
Retrieved from "https://arthur.fandom.com/wiki/D.W._Tale_Spins?oldid=396600"
Community content is available under CC-BY-SA unless otherwise noted.