"D.W. Unties the Knot" is the second half of the second episode in the fourteenth season of Arthur.

After watching a reality show, D.W. plans her own dream wedding, but becomes confused when she’s reminded of trying to find someone to "marry."

The episode opens with a battle between Dark Bunny and Bananomanoman. Bananomanoman throws a peel, which Dark Bunny easily jumps over. The show zooms out on the news talking about children mimicking what they see on TV. Then, Arthur is shown attempting to do a Dark Bunny hop, with Buster offering pointers. The show is then put on the side when D.W. introduces herself and informs the audience about how Arthur can't help but imitate what he sees on TV. Just then, Arthur interrupts and informs the audience that that's not what happens. He then switches to the real show.

After the title card, Arthur and D.W. bicker about their TV time. D.W. wins the argument, but the TV is tuned in to Big, Fancy Wedding. D.W. quickly gets interested in the show upon seeing a bride, Mincey Poodlemeyer, planning her dream wedding and becomes enamored at the prospect of having an extravagant wedding herself. D.W. then goes to ask her dad if she can have a wedding. David agrees when she's older.

D.W. then goes to Emily's house, explaining she can have a wedding since she is older by one hour. She also wants Emily to be her bridesmaid. Inside, the girls begin brainstorming, and D.W. decides that she needs an onion so she can cry and a fancy dress. Emily provides D.W. with one of Marie-Hélène's old party dresses, which D.W. loves, though it's too long for her. D.W. then lists the other wedding essentials: food, music, and someone who makes her say, "I do" - which seems to be a major part of weddings. Seeing all the necessities, Emily wonders where they can find a palace.

D.W. and Emily head to Muffy's mansion to finalize a deal. However, they can only get a 1-foot space with $1. When D.W. mentions they need to host a wedding though, Muffy reconsiders. D.W. claims the wedding is for "Deeangeleenora Woo" ("Dee Woo" for short), as she doesn't want Arthur to attend, since he messed up at Lucy's wedding. Muffy decides to become the wedding planner.

Inside, Muffy explains how every wedding needs a theme. D.W. wants a unicorn theme where "Dee Woo" will get dressed up and a unicorn will take her and Emily to the wedding; the ceremony will have a cake, music, presents, rainbows, just about anything "Dee Woo" wants. Muffy is impressed but realizes that it is a hard job, so she gives them Bionic Bunny Walkie-Talkies.

D.W. and Emily get the wedding ring from a gumball machine, and have the Tibble twins be the people who make D.W. say "I do." They initially refuse, until D.W. reveals that they can throw rice at the guests. Muffy then comes in, asking about the groom, which throws D.W. off. On a whim, she chooses the groom to be James.

D.W. and Emily return to Muffy's mansion, where she shows them the invitations and design of the wedding, much to D.W.'s amazement. However, as Muffy is gushing over the celebration, she reveals that a wedding is a romantic affair in which the bride and groom commit to loving and living with each other forever; sometimes whole families live together. D.W. is shocked, since she was unaware of this. Emily hypothetically asks if the bride can call the wedding off, but Muffy insists that "Dee Woo" can't get cold feet, since the wedding is tomorrow.

That night, D.W. has a nightmare of James' family living with and always crowding her. After waking up, she decides to not show up for the wedding.

The next morning, D.W. plans to spend the day with her dad, only to learn that David has been hired to cater the ceremony. When they arrive at Muffy's mansion, David tells D.W. to play with the other kids as he goes to the kitchen. Emily then comes over to get D.W. dressed up. The Tibbles confront James, telling him to get ready to "marry" D.W., much to his confusion. He runs off with the twins chasing him. Inside, D.W. is finishing dressing up when Muffy calls them, shocked about the number of children at the event and wondering where the bride is. Stressed, D.W. reveals that she's "Dee Woo," and wants the wedding to be called off, much to Muffy's surprise. Outside, the Tibbles bring James to D.W. and Emily as they begin throwing cooked rice, much to Emily's chagrin. The music starts, so it's time for D.W. to say, "I do" to James. However, D.W. says, "I don't" and runs off crying. As D.W. rushes past David, Muffy hands him the bill for the wedding, assuring that she subtracted the catering costs. Upon seeing it, David is taken aback and drops everything.

A few days later, D.W. and Emily are watching Big, Fancy Wedding again. However, D.W. lets Arthur have the TV. As they walk outside, Emily expresses that she’s glad D.W. didn't get married, although the unicorn party was fun. D.W. admits that she’ll miss having Emily as her bridesmaid, and asks if she would like to be one at her real wedding in 20 years. Then the episode finishes. 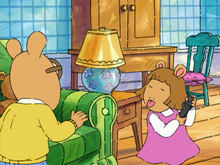 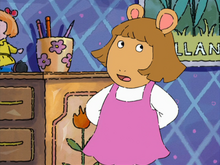 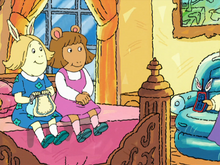 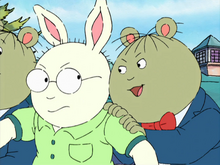