D.W. and the Beastly Birthday

"Time to put on your party hats and dancing shoes - D.W. is turning five! When her birthday doesn't go as planned, D.W. runs away to the magical island of Ukubonga. Meanwhile, Arthur has skipped her birthday party to go on a school trip to the planetarium - but instead of transporting him into outer space, it transports him 4 years into the future! This is one party you don't want to miss."[16][17]

D.W. celebrates her fifth birthday with Emily, Bud and the Tibbles. She is angry because her birthday has not gone as expected. The weather is bad, she did not get the Fluff McGuffin doll she had been dropping hints about, Emily wore a prettier dress than her, Bud beat her at every game, and the Tibbles overdid it with whacking the piñata. Even the cake is wrong. She suggests playing Hide and Seek and when Timmy complains, she tells the others that it is her birthday and everyone has to do as she says. Bud is “it” and D.W. hides under the staircase with Nadine. Nadine asks where Arthur is.

Arthur is on a field trip to the planetarium and happy to avoid D.W.’s birthday. Ladonna disapproves, but Arthur tells her about D.W.’s fourth birthday where he had to give horsey rides to all the kids because D.W. said so. Ladonna agrees that was bad, but she is shocked to learn that Arthur bought a card dedicated to “the world’s best little brother” and forgot to buy a present. He plans to buy chocolate after the planetarium.

Meanwhile, D.W. wonders if the others have given up looking for her. To cheer her up, Nadine gives her a magic ticket to Ukubonga. She warns D.W. that the island will give her whatever she wants and that often turns out “not so great”.

Meanwhile, the big kids sit down in the planetarium's theater while Mr. Ratburn walks out to answer a call from Mr. Haney. Buster suggests traveling back in time to get D.W.’s present. Brain explains that you can only slow down time by moving very fast while everywhere else time would pass at its normal pace.

D.W. reads the spell on the ticket and finds herself on a beach with a boat. She sails in the boat and is attacked by a giant octopus. When she says that it is her birthday, the octopus becomes obedient and carries D.W.’s boat.

Buster wakes Arthur up because something unusual has happened. Mr. Ratburn tells the kids, that a wormhole has transported them four years into the future.

Arthur, Buster, Ladonna and Muffy walk home and see a few new buildings and a new generation of holographic cell-phones. Arthur wonders if his family will recognize him, and Ladonna reminds him that he has not changed but they have.

When Arthur gets home, he is enthusiastically greeted by a girl who resembles D.W., but is in fact five-year-old Kate. It is D.W.’s ninth birthday and she is out partying with her friends. The rest of the family welcomes Arthur back as if he had merely been away for the weekend. He learns that D.W. now wants to be called Dora.

Kate shows Arthur Dora’s room, which used to be Arthur’s. It looks slightly more girlish than in Arthur’s time. Kate tells Arthur that Dora does not allow her in her room and gives an impression of Dora chasing her out, which sounds not unlike Arthur. Kate is happy that she has Arthur to play with now.

The octopus puts D.W. down in front of a tropical island. D.W. gives it her tiara as a tip. When she calls out, she almost gets eaten by four monsters. When the monsters see the ticket, they instead hail D.W. as queen. The monsters introduce themselves. They resemble D.W.’s friends, but lack the traits that annoyed D.W. on her birthday. Bobblebay (Timmy) and Bobbleboo (Tommy) like being quiet, Muk (Bud) is no good at games and Filomena (Emily) wears rags. Since the monsters do everything D.W. says, she gives orders to have a party.

Arthur plays ‘Tower of Tofu’ with Kate and gets bored. He is saved from playing horsey by Dora returning home. Dora is now taller than Arthur, wears glasses and cool clothes. She is happy to see Arthur, but threatening to Kate when she learns that Kate has been in her room.

Arthur and Dora have a snack together. Dora is now in fourth-grade and understands why Arthur used to be “crabby”. They watch a Bionic Bunny spin-off which Arthur likes.

On Ukubonga, the monsters and D.W. perform the Big Beasty Boogaloo song.

Bud quickly finds Emily and the Tibbles. D.W. is still missing, so Bud appoints the others deputy seekers.

D.W. plays Ukubonga Marbles against Muk but grows bored. She asks the others for ideas. They mention another monster named Ruthra who is big, mean, and will bow to no one. D.W. orders an expedition to capture him.

The next morning, Arthur is woken by Kate who wants to play and offers him a self-made muffin. Arthur instead goes to have breakfast with Dora and Buster who is visiting.

Arthur, Dora, Buster, Ladonna and Bud go to the Hover Park and ride a kind of skateboard on an airstream. Dora is particularly good at it and all the kids have fun. When Arthur wants to go another round, Dora declines because she has homework to do. Bud takes Ladonna to meet his friends. Dora gives Arthur and Buster her Hover Pass and Buster wonders why Arthur always tried to get away from her.

D.W. confronts Ruthra, who is a large monster that resembles Arthur. She wants him to play with her since she is getting bored of the others, but she insists on him bowing to her first. Ruthra recognizes her ticket but absolutely refuses to bow. On D.W.’s command, the other monsters capture Ruthra.

When Arthur returns from the Hover Park, Dora is playing cards with Vicita, but when he asks Dora to watch Cyborg Cindy with him, she says she has to do homework. When she calls him, he is eager to help her with her homework, but she merely wants him to turn down the TV. Arthur is disappointed, but refuses to watch the future equivalent of Mary Moo Cow with Kate. Kate tells him that he is just like Dora, which makes him feel guilty.

Ruthra has been chained up at the beach. He ignores D.W., though she tries to bribe him with a cake. When she tricks him into bowing down, he throws the cake at her and is punished by having to listen to the Nuk-Nuk bird sing a Mary Moo Cow song.

The Bobbles suggests throwing Ruthra into the island's volcano, but D.W. finds him interesting precisely because he does not worship her.

D.W. returns to Ruthra and tells him that she no longer wants him to be obedient. He tells her his story. He used to be Arthur. On his fifth birthday, he hid under the stairs because the party was not going his way. Stanley gave him a ticket and he became king of Ukubonga. Like D.W., he first found it great and then boring because life was too easy. Leaving the island was not possible, so he lived alone and became big, mean and lonely. D.W. vows to leave and to take Ruthra with her.

Dora is just having a holographic conversation with the Tibbles in space when Arthur comes in. He apologizes for not wanting to spend time with her when they were younger. Dora admits that she would have been the same. When Arthur asks her to hang out together, she pushes him out.

When Arthur does his homework, Kate comes in with a Fluff McGuffin and remarks that it would be no use to invite Arthur to her tea party. The doll reminds Arthur of young D.W. and he confesses that he misses her. He has an epiphany and joins Kate's tea party.

At night, D.W. frees Ruthra and wants to escape with him in the small boat. The other monsters notice them and call vines from the jungle. Ruthra manages to free the boat, but the vines pull him back while D.W. can escape.

Arthur is bored by Kate's tea party and wakes up.

Arthur wakes up in the planetarium and is happy to find that he is still in the present. He declines an invitation to Muffy's party and runs downtown. He passes the chocolate store, but decides on the toy store instead, where he convinces the store assistant, who is just closing, to let him in.

Meanwhile, D.W. wakes up in the storeroom. She is worried that the others have given up looking for her. She wants to be found.

Arthur returns with a present and discovers that the other preschoolers have indeed given up the search. Since he remembers the storeroom, he quickly finds D.W. and gives her his present, a Fluff McGuffin Doll. D.W. is happy and forgives him for the birthday card. Arthur tells D.W. that he likes her and D.W. likes him too, despite being a terrible birthday card picker. They enjoy each other's company for a moment, then they start bickering again. D.W. teaches Arthur the Beasty Boogaloo Song while her friends resume searching.

The special ends with Arthur, D.W. and the monsters doing the Beasty Boogaloo on Ukubonga. 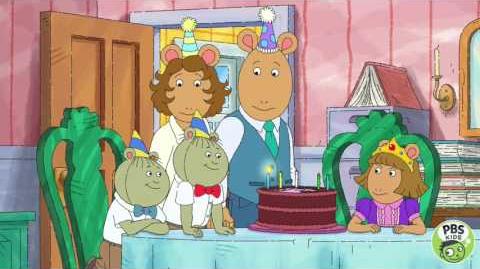 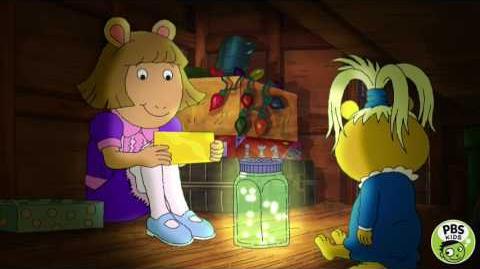 ARTHUR The Magical Island of Ukubonga 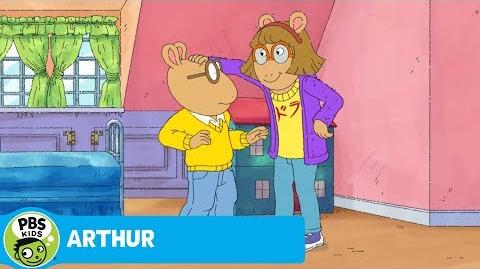 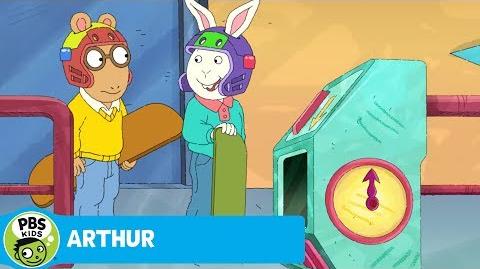 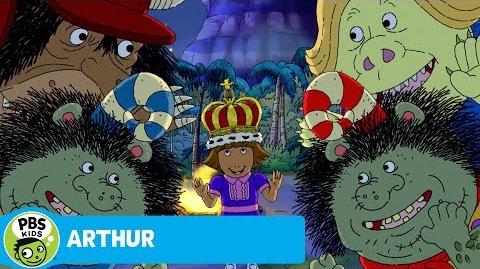 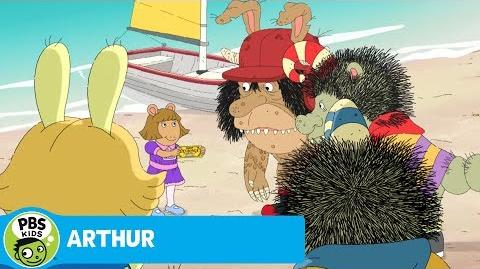 ARTHUR The Island of the Ukubonga PBS KIDS 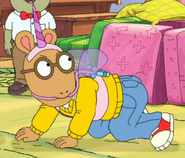