"Do You Speak George?" is the first half of the ninth episode in the tenth season of Arthur.

Everyone at school starts speaking their own made-up language.

Arthur, Francine, Buster, Muffy, Binky, Fern, Brain and Sue Ellen ride in a cart of hay. Arthur comments that it's great when they do things as a group, and they bring up a snowball fight at The Tree House, climbing Moose Mountain, and river rafting in a giant rubber duck (in Buster's dream). George tries to catch up the cart, but is sad when his friends leave him behind.

Buster advises Arthur on shooting a marble, which launches too far and rolls to Francine and Muffy. They speak strangely, and when Arthur questions them, the girls explain that they are speaking "oolah," a secret language. Buster wants to learn it, but Francine responds that then it wouldn't be a secret language.

Arthur visits George and teaches him "Arster-Buthur," he and Buster's secret language. At school, George gets frustrated with speaking Arster-Buthur and moves to sit with Sue Ellen, who tells him he should learn Oolah instead. Francine gets mad at Sue Ellen for "nearly contaminat[ing] Oolah," and George says, "I think you've all gone crackers!"

George asks Binky to create a secret language with him, but leaves when Binky burps, meaning "hand over the raisins." He goes to Brain, who wants to invent a new language as well and invites him to the Ice Cream Shop to discuss it tomorrow.

That night, George dreams that he and Wally venture into the Gramazon Jungle, get attacked by Tongue-Twisting Toads, and cross a pit of gobbledygook. They come across a village of smaller Georges, the Georginis, who teach their language made of "gestures and sounds."

George reports his idea to Brain, who dismisses it because it "looks really silly." George tries to show his language to other people, none of whom appreciate it. At school, George watches a ball bounce into Arthur's bag, and Francine runs to grab it. They argue in made-up languages, and George resolves the argument by showing that Francine just wants to get the ball. He comments that "things were a lot more fun around here when everybody understood each other!"

Everyone else apologizes and asks to learn George's language (since they refuse to learn each others). George considers the advantages of his language, but realizes that people with injured limbs could not speak it. He suggests that they continue speaking normally, and runs off to play marbles with his friends.

Do you speak Binky? 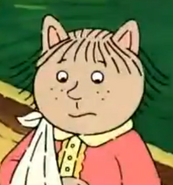 Jenna with a sling, not able to "speak" George's language.
Show/Hide gallery