Dry cleaners worker is an unnamed employee of the local dry cleaners in Elwood City. She's an old lady who is blonde and wears glasses. 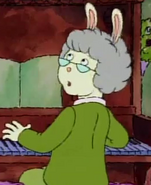 The dry cleaners worker in her first appearance, with gray hair

The character working at Trident Books in Buster's imagination

Getting a cigar box appraised for $37.
Add a photo to this gallery

Retrieved from "https://arthur.fandom.com/wiki/Dry_cleaners_worker?oldid=401011"
Community content is available under CC-BY-SA unless otherwise noted.