Elias Howe was the inventor of the modern sewing machine. Although not the first to think of it, he made the first one with all three modern features: a needle with the eye at the point, a shuttle operating beneath the cloth to form the lock stitch, and an automatic feed.

He appeared as one of Mr. Ratburn's puppets in "What is That Thing?".

Later in the episode, Buster's winning Bionic Bunny episode contest idea included Howe as a villain planning to hypnotize all cats in the city using a giant bobbin. 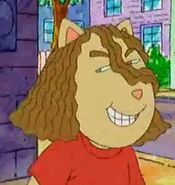