The Elwood City Grebes are a professional baseball organization that represents Elwood City and dates back to at least 1918. They are a fictional representation of the Boston Red Sox. They first appear in "Bitzi's Break-up", but played a more prominent role in "The Curse of the Grebes," when they compete in the World Championship (a parody of the World Series). Before the episode, they hadn't won the World Championship for 87 years. Their home venue is Elwood City Stadium.

The Grebes are named after a bird species native to the Elwood City area which is now rare because of the forest being cut down for urbanization.

In "Bitzi's Break-up," the Grebes are portrayed as a horrible team, losing their 23rd game in a row.

In "Ladonna Compson: Party Animal", which (probably) takes place the following year, the Grebes have made it to the playoffs.

The Grebes have similarities to the Boston Red Sox. The Curse of the Kid parodies the Curse of the Bambino and three players (Playmon, Winlin, Batería) are based on actual players from the 2004 and 2005 Boston Red Sox team. In "The Perfect Game" Francine designs a stadium called Frenway Park, which refers to the Sox's Fenway Park.

According to league statistics the Grebes were better than the Kings, although the Kings manage to force the series to Game 7. These are the statistics for the most popular Grebes

An informative table of which teams win which games in the series. 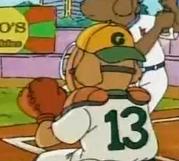 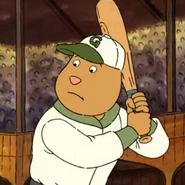