"Fern's Slumber Party" is the second half of the fifteenth episode in the second season of Arthur.

Fern is playing detective with her dolls when her mother tries to make her introduce the show, like Arthur usually does. Fern suggests just going to the title card.

Fern accompanies her mother to a copy shop where Mrs. Walters boasts about her daughter's creativity. She has a fantasy of Fern introducing a talking computer she invented. In Fern's fantasy the same computer steals her show.

Mrs. Walters brings signatures she collected to the office of an environmental protection group. She says that Fern will be helping soon. She has a fantasy of Fern having solved some major environmental problems. Fern sees herself giving a talk on protecting the ocean which puts all listeners (including fish) to sleep.

At the school open house the other kids notice Francine's new bracelet. Francine hands out cookies that match the kids' personalities. Fern gets a nondescript cookie.

When Fern is playing detective again at home, her mother tells her that she needs to have a slumber party to develop her social skills. Fern reluctantly agrees.

Fern has made invitation cards in code because she thinks the other girls would not want to come anyway since she's boring.

On the school playground, some of the invited girls are less than pleased. They decide to bring their own toys to the party. Fern overhears them and is relieved.

Fern asks her mother to leave her alone with the guests. Muffy, Francine, Sue Ellen, Jenna and Prunella arrive. Fern makes an attempt to suggest a game but is overruled by Francine.

Francine seems to suggest only games that she is good at. The girls cannot decide what to do, but Fern does not make another attempt to suggest something.

Eventually everyone is bored. Suddenly, Francine realizes that her bracelet is missing. The girls look for it, until Fern says that she knows where it is and retells the events of the party in the style of a classic detective story. She remembers Francine taking off the bracelet, Muffy putting it on a table, Jenna dropping a bag of chips on it, and Prunella cleaning up after Jenna. She finally reveals that the bracelet is in the waste paper bin. Prunella accidentally threw it in there with Jenna's chips bag. The girls are impressed.

When Mrs. Walters brings in the dinner, Fern is reading Sherlock Holmes to the others. Mrs. Walters remarks that she knew the party was a good idea. 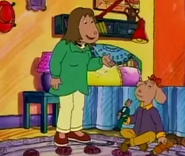 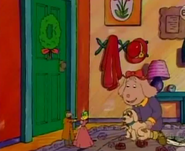 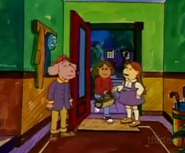 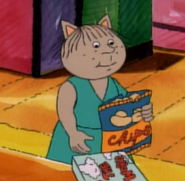