"Fern and Persimmony Glitchet" is the second half of the second episode in the tenth season of Arthur.

In the introduction, Fern talks to the viewers about how classic stories wouldn't be so interesting if they didn't have a conflict. She gives several examples of altered tales, played out by Arthur characters, like Muffy and Francine played Cinderella and her stepmother, Arthur and Binky played Jack and the Giant, and D.W. and Thora played Little Red Riding Hood and Her Grandma. However, D.W. (Little Red Riding Hood) ends the intro by saying, "Hey you, narrator! If there's no big bad wolf in my story, what's the point?"

In the Elwood City Library, Fern and Francine are returning the same item, book thirteen of the "Horrendously Horrible Happenings" series. They both really enjoyed it and can't wait until the next book comes out. They talk about the previous books, reliving some of their favorite moments. Fern wishes she could write a series like that someday, and Ms. Turner overhears. She convinces Fern to write to the author, Persimmony Glitchet. Francine doesn't think he would write back, but Fern sends a letter anyway, asking for advice on becoming a writer.

A few weeks later Fern gets a reply, but the letter turns out to be blank. Fern believes that it's written in invisible ink, like in the books, so she gets out her spy lamp. Writing shows up, and it says: "If you want to be a writer, you should read, write and rewrite, and look for ways to publish what you write."

Fern decides to write a story for the upcoming issue of Lakewood Elementary Reader. Under the pen name Agatha Shelley, Fern creates a short story called "Happy Happenings". Her story makes it in, and Fern starts asking her classmates what they think of it. Arthur says he found it boring, Brain describes it as "a shallow take on a shallow life", and Binky says that he liked the ending, but the rest didn't work for him. He rips the pages out to make paper planes, which shocks Fern. At the library, Francine asks Fern if she read "Happy Happenings" and Fern lies that she didn't. Francine advises her not to read it, because there is no mystery and nothing scary happens. Fern points out that not all books are like that, but Francine says that the book is way too happy and reads an excerpt, where the main character Felicity Bonchance was gardening until she found some buried treasure and gave out candy and ice cream to the whole world. Francine says that it's boring how nothing bad ever happens to her and that "Agatha Shelley" must be from a different school. Fern says that maybe it's not her real name and maybe it's a pen name, to which Francine replies that she wouldn't put her real name on a story like that.

This makes Fern feel bad, so she sends another letter to Persimmony Glitchet asking what to do. Persimmony Glitchet writes back again, saying that he always imagines horrible things happening to people who criticize his work. Yet, he always looks closely to see if what they say is true. He says that Fern can either rewrite or just give up. Inspired, Fern decides to rewrite her story. This time she adds some good conflict, and it becomes a hit with the students in the next school issue.

Finally, the 14th book of Persimmony Glitchet's series comes out. Fern and Francine wait in line to get a signed copy, but it turns out that the author isn't even there. Just as they're about to leave, a stranger starts talking to Fern about the Horrendously Horrible Happenings series and their author. Fern tells him about the invisible ink letters she received, and the man asks to see her copy of the book. He starts writing in it and then hands it back, leaving quickly. Francine and Fern look at what he has written:

It turns out that the stranger was Persimmony Glitchet himself, but he drives away before the two can question him. 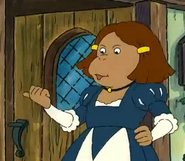 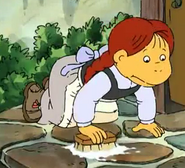 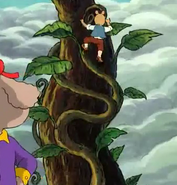 D.W. and the Wolf

“…to everyone in the whole world. Bleurgh!”

“I've got a second chance!”

“…and smuggled out the gold coins in her tambourine.”

“Mr. Glitchet regrets that he cannot be here today.”