"Fernlets by Fern" is the first half of the eighth episode in the thirteenth season of Arthur.

As part of her latest business venture, Muffy talks Fern into writing poems for a new line of greeting cards which becomes the hit of Elwood City. But booming business causes Fern to burn out.

She gets up from her seat and prepares to leave when she and Muffy run into each other, which causes the two girls to fall to the ground. Muffy tells Fern to watch where she is going. At the Crosswires' Mansion Muffy give her mother the card and as her mother is reading it she Muffy realizes that she got the wrong card as it was signed by Fern.

At Lakewood, Muffy tells Fern she liked the poem she wrote and wants to make a business deal with her using Fern's poems and the picture she painted. Fern accepts it. That night, Fern begins writing poems and continues writing into the next day and meets Muffy at the Ice Cream Shop. Muffy approves the poems.

The next day, Muffy shows Fern the Father's Day cards and is impressed with it. She then finds out Arthur has one and then Binky buys one. Muffy tells Fern she gave her credit, which is located on the back and is called Fernlets by Fern.

Then Mrs. MacGrady asks for various cards to be made including birthday cards and Fern at first hesitant agrees to it. Fern later that night had made so many poems she is very tired and Muffy calls her and tells her to make even more.

The next day at school, Buster and Francine approach Fern wanting to interview her and pretty soon Fern is starting to realize Muffy is treating her like a machine.

When Fern gets home and looks at the calender she realizes her mom's birthday is tomorrow and tries to write a poem, but she can't since she literally has crashed. She then notices the card in her backpack and gives to her mom the next day.

Her mom reads the card and Fern realizes that the card is actually a card Muffy got for her mother on Mother's Day. Fern then says that she will never be able to write a poem again, but her mother reassures her that she will.

The next day, Muffy meets Fern at the Ice Cream Shop and tells her that Binklets by Binky isn't working out for her and even goes as far as to say that she had to pay Binky to stop writing Binklets.

Muffy then apologizes to Fern for firing her and says that she wants her back, but Fern tells her she's done writing greeting cards. Instead Fern starta writing poems for fun. 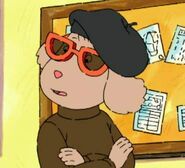