"Flaw and Order" is the second half of the fifth episode in the tenth season of Arthur.

When he is accused of cracking Dad's cake platter, Arthur sets out to clear his name—and to figure out what keeps making that mysterious yet familiar "dun-dun!" sound.

Mr. Read comes into the living room to find that his cake plate has been chipped. He is very upset about this, and wonders how it happened. D.W. shows Mr. Read a tape that she has just filmed of Arthur and Buster getting ready to go outside, and Arthur holding a baseball and saying, "Hey Buster, let's play ball. Here, catch." He throws it, and in the background, the cake plate gets hit, but is unseen.

Arthur and Buster swear that they didn't chip the plate, but Mr. Read doesn't believe them, and says that when he gets home from work that he's going to have a serious talk with them. In an effort to prove it wasn't them who chipped the plate, Buster and Arthur act as detectives, with The Brain acting as their scientist, and Fern acting as their adviser.

At first, they're unsuccessful in finding clues, but The Brain discovers from a picture of the chipped plate, and a book on types of chipped plates that it wasn't a baseball that chipped it, and from analyzing the tape, just before the plate chipped, there was a strange bumping noise. Arthur and Buster go back to Arthur's house, and find a broken watch that happens to belong to Ms. Perske, the lady who sold Mr. Read the cake plate. She blames them for breaking her watch and asks them to leave. Just as all hope is about to be lost, Arthur and Buster arrive at Arthur's house once again, and Buster is hit by a rock. Arthur looks at the manhole cover on the road, and as a car goes on top of it, a rock is flung into the air, and hits Arthur's house. Arthur and Buster have solved the mystery.

When Mr. Read comes home from work, Arthur, Buster, Fern and The Brain use their evidence to reveal that after Ms. Perske had dropped off the cake plate, her watch fell off without her noticing, and landed on the manhole cover. As a car drove by, the watch was flung into the air, and it hit the cake plate, breaking the watch and chipping the cake plate. Mr. Read apologizes to Arthur and Buster for not believing them. Mrs. Read announces that she'll call someone to fix the manhole cover, and Ms. Perske gives Mr. Read a new cake plate for free out of regret for what her watch had done. She sits it by the open window, and once again, a rock is flung into the air. It chips the cake plate as everyone shouts "Oh no!" followed by a shattering noise, indicating that the plate had broke again. 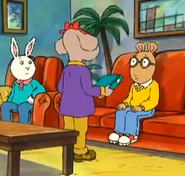 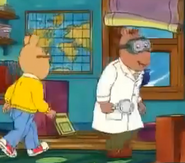