"Fountain Abbey" is the first half of the fifth episode in the eighteenth season of Arthur.

Muffy tells Francine, that she is certain that she is the princess of Fountain Abbey, an English stately home. She has a fantasy in which she sits in a banquet hall, dances with George and bullies her maid, Francine. In reality, Francine is annoyed and leaves.

In the Sugar Bowl, Muffy hands out invitations to her coronation. She shows around a photograph of her great-great-grandmother Mary Alice Miller in front of Fountain Abbey and tells her friends, that her dad has hired a company to research the family's history. Binky thinks that the building looks familiar.

At home, Binky opens an old chest and finds another photograph of Fountain Abbey.

At the coronation party, Muffy assures everyone that she will still be their friend as a princess. However, when she opens the package from the genealogical company, she finds a diary which reveals that Mary Alice was merely a housemaid, and a clumsy one at that. Upset upon finding this out, Muffy runs out of the room crying.

Binky comes by and reveals that his own ancestor, Lord Bantam, was the owner of Fountain Abbey and Mary Alice's employer. This makes Muffy feel even worse. To cheer her up, Francine starts reading from the diary.

Flashbacks show life at Fountain Abbey. The butler, Mr. Clarkson, teaches Mary Alice to iron a newspaper, while Ms. O'Breean claims that Mary Alice believes herself to be better than the other servants.

While Mary Alice dusts the library and accidentally destroys several priceless objects in the process, Lord Bantam confesses to her that he always dreamed of joining the circus. He shows her how he can juggle one pin, but Mary Alice tells him that juggling requires several objects.

At dinner, Mary Alice accidentally spills soup on a stern Lady Bantam. The Bantams talk about their financial woes. With encouragement from Lord Bantam, Mary Alice suggests selling a piece of land. Lady Bantam is dismissive, but her son takes up the idea.

One month later, Lord Bantam juggles horseshoes in the stables, where Mary Alice is writing in her diary. She suggests juggling while riding backwards on a horse. Ms. O'Breean sees them and decides to teach Mary Alice to mind her station.

O'Breean gives Mary Alice a present of earrings that actually belong to Lady Bantam. When Lady Bantam sees the earrings, Mary Alice is about to be fired, but when she tells Lord Bantam of her plans to build a circus on the land and charge admission, Lady Bantam promotes her to business manager instead. O'Breean is so angry, that she accidentally reveals that she framed Mary Alice.

Here, the diary ends. Muffy is proud that her ancestor worked her way up to riches. The kids do research in the library and discover that Mary Alice eventually sold Fountain Abbey, making the Bantams lots of money. She sailed to America with Lady Bantam and her maid O'Breean. She also expressed an interest in cars, possibly the foundation of Crosswire Motors. 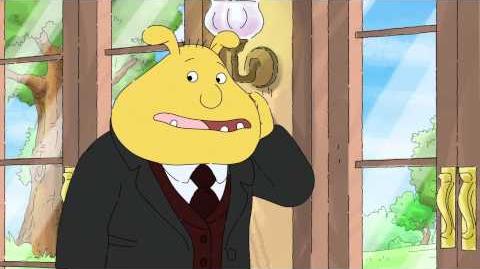