Muffy wants Francine to look good for her school photo.

The episode begins in Mr. Ratburn's class. Mr. Ratburn tells the students that school pictures are scheduled for next Thursday. Arthur gives the viewers advice about school pictures, like not to drink soda before their picture is taken.

Buster is shown taking his picture but burps loudly right when the picture is taken. And Arthur also says that it's not wise to rub on a carpet and sit on a metal seat. Prunella rubs her feet on the rug and sits on a metal stool, causing her hair to stand on its ends due to static electricity (and getting frightened by a housefly).

Arthur adds that you shouldn’t wear a flower if you have allergies. Binky is waiting for his picture to be taken but sneezes from the flower he’s wearing, knocking over the backdrop behind him at the moment the camera snaps.

After the title card, we now see a kickball game at the ballfield. Arthur's team is in the ball field planning out a strategy against the fourth graders. They need to get the fourth graders one more out to win. The plan is for the ball to go to Francine no matter what. The game resumes and Arthur pitches the ball.

The kicker kicks the ball on the first shot, it hits Arthur's face and then it flies toward Francine, but Buster gets in the way and knocks over Francine. Quickly, Francine grabs the ball, manages to tag the fourth grader out and win the game.

In the girl's restroom, Muffy, Sue Ellen and Prunella are talking about what they’ll be wearing to school pictures. Francine arrives and is happy about the winning game.

Muffy asks what Francine is wearing to school pictures, but Francine doesn't really care. Muffy thinks that Francine would have the most beautiful picture in the class (besides herself that is) and that she could be like Muffy.

Francine doesn't believe it though. At Francine's house, Francine and Muffy look in Francine's closet and end up finding a pink dress. Francine tries it on, Muffy thinks it‘s perfect. Continuing on, Muffy now wants to do Francine's hair to, but Francine thinks there's nothing wrong with it.

Muffy is irked at this and has Francine close her eyes while she does her hair. She does so and opens her eyes to a hair disaster. Francine becomes frustrated at this and tries to get out of it, but Muffy yet has another idea. She takes out her cellphone from her purse and she calls Flossie, a hairdresser, for professional help.

Muffy tells Francine to meet her at the Salon de Beauté, tomorrow. When they meet, Francine is disappointed to see that it was a beauty parlor, and she refuses to enter, but Muffy came prepared with a "secret weapon".

A photo of last year's school picture of Francine with messy hair and dirt on her face, giving a very goofy smile is handed over to Francine. Francine is convinced and enters the salon. Flossie is pleased to see Muffy and Francine arrive.

She takes Francine and takes a screenshot of her, she uses the snapshot and shows her various hairstyles for Francine to pick, such as the "Queen of the Nile" look and a tall curly style, Francine asks if she has something more normal, she does so and shows her the Prom Queen hairstyle which Francine accepts.

Flossie gets to work and works on Francine's hair with washing, rinsing, cutting, combing, etc. She then puts a hair drying machine over her head and has her rest and to wake up with her finished hairdo.

In her dream, Francine has a dream of her at a professional kickball game with her new long curly hair. The game starts with Arthur pitching, Francine pulls the kicker down with her hair, causing him a strike.

We cut ahead and watch Francine launch a flying ball back towards Arthur with her hair, giving the opposing team an out. At the finishing part of the game, she runs toward the home plate and touches it with her hair just before the ball is returned. Francine's team cheers and carries her (and her hair) out happily.

Francine wakes up and sees her hair results, it’s nothing that she expected. Her hair is instead curly and is a Jewfro, while Muffy ended up being the one with the Prom Queen style. Muffy thinks it's wonderful. Francine pays Flossie the money she saved up for her new soccer ball and leaves the beauty parlor.

She prepares to get on her bike, but Muffy stops her for curly hair and bikes don't go together. Back at home, Francine tries on the pink dress again. Muffy sees it as rather splendidly and thinks it looks good with her hair.

She reminds her not to swim, ride in convertibles and to wear headgear in rainy weather. Francine's Mom tells Francine that Arthur called to remind her to bring the kickball to the next game tomorrow. This reminds Muffy, and tells Francine not to play kickball. Francine highly regrets this, but Muffy reminds her of her 'secret weapon', making Francine go for it.

The next day of school, Arthur and Buster run down the hall, kicking a ball of paper and come up to Muffy and Francine. The boys are shocked at Francine's new 'do. Francine asks if they like it, but the boys just laugh at it, angering the girls.

At lunchtime, while Francine is eating, one of her hair clips jumps out of place and nearly hits Buster. In reaction to this, Buster, along with Brain, make fun of her hairstyle.

Francine becomes infuriated and grabs a bottle of ketchup to use on them, but Muffy stops her and accidentally slams her hand down, causing her to squirt ketchup on her dress. In the girl's bathroom, Muffy attempts to clean as much off as possible and covers the remaining stain with a bow. Francine begins to feel reluctant of her new looks.

The kickball game begins and Arthur is surprised to see that Francine can't play, for she has to stay presentable for school pictures. The game starts without her, Buster and Arthur are still confident and think they can do it without her, but problems start when they have trouble getting the ball.

The fourth graders begin winning by two to nothing. At the benches, Muffy and Prunella try hard to keep Francine restrained in her position, but as Prunella claims that it's just a silly game, a kicker kicks the ball toward her.

Francine quickly jumps out of the benches and catches the ball, outing the fourth grader. Francine is now in the game and is up to the home plate, the catcher mocks at her hair, but she isn't bothered by this.

The pitcher pitches and Francine kicks it far over the trees. She starts to dash around the bases and reaches home base, winning the game.

School pictures start and Muffy is upset that Francine ruined her looks, but Francine says that she was getting tired of staying good-looking and that she liked the way she looked before.

Buster's picture is taken with him reminding the cameraman that he was the one that burped; the photo comes out with Buster's eyes closed. Arthur gets his picture taken, but due to the flash, it reflects off Arthur's glasses and causes beaming light.

Muffy tries to prevent Francine from getting her school picture taken, but Francine tells Muffy she's making it worse and then Francine eventually escapes from Muffy's grasp as the man says "Next" and has her picture taken while she's her filthy self, but with a pleasant smile.

Muffy's turn comes, then she taunts "Oh, that Francine!" and she looks rather angry than smiling when her picture is taken.

We cut to the school hall, Francine's hair is finally back to normal, Muffy is throwing away her picture, and she suggests to Francine to burn her photos. But Francine disagrees and actually likes her picture. Arthur comes up and asks Francine for a trade of pictures.

She agrees, Arthur looks at her picture and likes it, Francine likes Arthur's also. Muffy walks off regretting that Francine will never be like her. Arthur asks for a game of kickball and Francine answers yes. Arthur and Francine both run and open both school doors inward and outward.

Francine's hair, after Muffy attempts her best in Francine's bathroom

Muffy and Francine about to enter the Salon de Beauté.

The "Queen of the Nile" look— one of the many hairstyle options for Francine.

Francine and Arthur trading each others' school pictures

Jenna having her school picture made.

Binky's third grade photo before repeating the grade; he sneezed because of the flower he was wearing.

Prunella's third grade photo; she got an electric shock from rubbing her feet across the carpet and sitting in a metal chair, which messed up her hair (and at the same time got startled by a housefly). 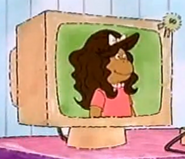