Francine Alice[10] Frensky is the daughter of Oliver and Laverne Frensky, and the younger sister of Catherine Frensky. She is an athletic girl in Mr. Ratburn's third grade class at Lakewood Elementary School. She is in Mr. Ratburn's class again for fourth grade.[11]

Francine is an anthropomorphic monkey with a brown complexion. She has medium-length brown hair with a bob hairstyle, which she puts hairclips on to pin it up (her hairclips are red in the books, but yellow in the cartoon).

She is usually seen wearing a red shirt, blue jeans, red and white sneakers, white socks and does not wear any shirt underneath like some of her friends.

Her sleepwear is a cream-colored pajama top with a big lime green #1 on the front and lime green pajama pants with stripes.

Her swimwear is a yellow maillot. In summer, she often wears a yellow T-shirt with a red stripe in the center and on the sleeves and a pair of red shorts. Her formal outfit consists of a pink collar blouse, gray pants and white shoes.

In later seasons, her formal outfit is changed to a white blouse, a black necklace, red pants and black shoes. In Season 1, she originally wears a pink T-shirt, blue overall shorts, pink socks and brown shoes.

Her football uniform consists of a very large white shirt with a black #11 on the front and a red football helmet with a black stripe and white face mask.

During cool weather outside of winter, she wears a black button-up #5 jacket with white sleeves and the #5 on the left front end and on the rear.

During winter, she wears a white stocking cap with a fluffy red ball on top, an orange winter coat, a blue and white striped scarf, white mittens and brown boots.

She also has a pair of Dame Edna-style movie star glasses that are pink in the books, but green in the cartoon; although they do not have any glass in the frames.

In "Arthur's First Day" she wears a orange shirt with red hairclips were already colored in the books and jeans became red. She started fourth grade (with students).

In "All Grown Up", in her adult years, she has a shaved-side mohawk hairstyle, golden earrings, black jacket, pink blouse, blue jeans and sneakers (with the letter "F").

She was initially had completely flatnened her hair down to her cheeks in her first appearance in Arthur's Nose, even though Arthur's Eyes and all later books and adaptations have changed her hairstyle into a flip.

She also initially wore dresses in the earliest Arthur books. In Arthur's Valentine and all later books and adaptations, she mostly wore boyish clothes and only wore dresses for extra special occasions like for Picture Day in "Francine's Bad Hair Day" and for her older cousin, Seth’s Bar Mitzvah in "Francine’s Split Decision". Her hair was initially a light brown shade, but became darkened to a medium shade in Arthur's Teacher Trouble and all later books and adaptations.

Even though Francine doesn't like having her hair done like her best friend Muffy does, she has had a few alternate hairstyles in the series. Her signature hairstyle is a straight flip, even though it's not flat. In Arthur's Valentine, she has wavy hair when she becomes Arthur's secret admirer while at a cinema sitting in seat 3B. In "Francine's Bad Hair Day", Muffy urges her to get her hair done for school pictures, and Francine first wants the Prom Queen hairstyle that Muffy was getting. Francine has a dream where she's playing kickball and has super-long hair that can be used to retrieve the ball or reach a base. When Francine checks out the results, she is given a tightly curled hairstyle instead. After "Francine's Bad Hair Day", she has since kept her signature hairstyle. In the end of "The Lousy Week", she and Muffy are both given a buzzcut to eliminate lice from reproducing in their hairs. 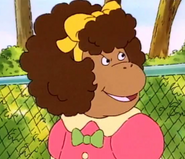 Francine with a tightly curled hairstyle

Francine with super-long hair and bangs in her dream

When Francine was a younger, she wore an orange short-sleeved shirt and yellow overalls shorts. Her hair was also a bit shorter when she was a younger. She started wearing hairclips when she was in preschool and wore a white shirt, pink pants, and sneakers. When she moved into second grade, she started wearing her usual red long-sleeved shirt, blue jeans, and red and white sneakers.

Francine as a preschooler (4 years old) in the episode "Locked in the Library!"

As a teenager and as an adult in the future, Francine appears to have grown more feminine by wearing dresses and other feminine clothing despite not liking to wear dresses. Also, her hairstyle is slightly different when growing up. As an elderly woman, her hairstyle is the same as when she went to Lakewood Elementary School and she's wearing a pastel blue cardigan, a white blouse with a pendant underneath the cardigan, a periwinkle dress and white high-heeled pumps; and is wearing hairclips again. She also appears to be married to Arthur on many futuristic occasions.

Francine's love of sports comes into play as revealed in the flash forward sequence in the last episode. She becomes the owner and CEO of a company that makes sneakers and regularly tries each pair. She loves her job as she also gets exercise while running her company.

Francine as a teenager

Francine as an elderly woman

Francine as an adult in "All Grown Up"

In the Living Books computer games like Arthur's Teacher Trouble and Arthur's Birthday, which are both based on their respective books and even predate the cartoon, Francine had reddish-brown hair and a light cream-colored complexion. Francine's voice sounded less masculine in those two games and was voiced by Marcella Evans before the cartoon replaced her with Jodie Resther.

In the later games during the 32-bit era of computers and software such as Arthur's Thinking Games, her appearance was the same as she looks in the cartoon show. 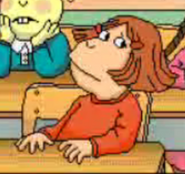 Francine is very athletic and loves sports, especially soccer, football, kickball, bowling, and baseball. The only sports she does not excel at are badminton and figure skating (which she dismisses as "girly", despite being a girl herself).

Francine is very determined, perhaps even restless, and if she doesn't have an immediate knack for a certain sport or skill, she can become frustrated.

Arthur once described her as a "sore winner." She also likes horses, and once accompanied Harry Mills to a horse race. She envies Catherine because she is a better horse rider. ("Francine Frensky, Olympic Rider".)

Francine is an excellent singer and drummer. However, she cannot do both at the same time very well. Even though Francine does fairly well in school, she does struggle from time to time.

At one point she even resorts to plagiarizing an entire paper (even though one must note she never know that it was wrong at the time, and had a nightmare of herself twenty years older where she was being sued for plagiarism).

Though she claims she's the best player in every sport, she is proven wrong in some of them: in baseball, her skills needed plenty of improvement as seen in "Arthur Makes the Team", and in the episode "The Big Blow-Up" where she showed resentment toward the Brain for his superior skills in soccer and when she refused to admit that she was kicking the ball out of bounds and had an attitude when the Brain called her out on it.

She always talks in a tomboyish, brash tone. At the start of the show, Francine was very rude and hot tempered.

This attitude is attempted to be tamed by a challenge from Muffy, by the entire class rebellion during a play about Thomas Edison, but neither of these lasts permanently. It is not until Fern Walters makes drawings about Francine, which motivates everybody else to also make drawings about Francine, when Francine starts to calm down. ("Meek for a Week", "Francine Frensky, Superstar", "Draw!".)

Francine also has a soft side. She will try to help her friends if they are having a big problem, but sometimes, if somebody says something about her whilst she's trying to help, For some reasons, Francine misinterprets it as criticism and leaves the room.

Francine does not like wearing dresses or having her hair done, which she believes would make her look foolish and less like herself as she explains in "Francine's Bad Hair Day". She prefers to wear clothes that are normally worn by boys, thus making her a tomboy. Despite that she does not want to have her hair done, her hair length remains the same.

Francine lives with her father, mother and sister, Catherine, in Apartment #3 at Westboro Apartments, with the least amount of living space compared to her friends' homes. She also has a pet cat named Nemo. Francine's large family (including Bubby) has been seen on a few occasions such as in Arthur's Perfect Christmas, "Background Blues", and "Is That Kosher?". Her father works as a garbage man at the Elwood City Dump, which embarrassed her. Her mother is not employed and usually stays at home. She is constantly jealous of Catherine for being a more advanced horseback rider ("Francine Frensky, Olympic Rider") and acrobat ("Francine's Big Top Trouble"). She and Catherine also argue over room decorations, letting Catherine move into the living room ("Francine Redecorates"). However, Catherine can be sometimes helpful to her. Her family does not often spend enough time together, although they do enjoy bowling ("The Frensky Family Fiasco"). Her father sometimes calls her "Franky." ("I Don't Want to Wake Up")

Due to her family's poverty, they were unable to replace her old bike she had since outgrown and are left with no choice but to ride her father's old bike that had seen better days, and discard it (which she claims was stolen until she tells the truth). Finally, her father finds it and manages to restore it. ("Stolen Bike")

They are a Jewish family who celebrate religious holidays such as Hanukkah in Arthur's Perfect Christmas and Yom Kippur in "Is That Kosher?".

Appearances (some in bold)