"Francine Goes to War" is the second half of the sixth episode in the fifth season of Arthur.

Francine can't believe it. She gets in trouble no matter what she does - thanks to the new nosy next-door neighbor! Will Francine get to play music with her drums or any of her favorite hobbies ever again?

Arthur mentions that it is not a good idea to make Francine mad. Francine takes offence, so Arthur reminds her of several times from previous episodes when she was mean. Francine claims that you can make anyone look bad by picking out his worst moments. She reminds Arthur of the way he cheated at “No Guessing” and of how he stole D.W.’s snowball. They argue.

Francine and Catherine have a pillow fight when someone bangs on the wall. Their dad tells them that they have a new neighbor, Mrs. Pariso, and that the girls should be quieter.

When Francine plays the drums on the roof, the caretaker of Westboro Apartments tells her to stop because Mrs. Pariso threatened to call the police. Francine vows revenge.

Francine and Muffy attempt a prank phone call, but Francine gets the joke wrong and Muffy blurts out Francine’s name. Mr. Frensky later tells Francine to respect elderly neighbors and grounds her for two days.

When Francine tells her friends about her problem, Buster mentions how some of his neighbors moved out because of termites. Muffy writes a letter warning Mrs. Pariso of rats in the building and Francine pushes it under Mrs. Pariso's door. The next morning, Francine finds the letter on the breakfast table with the spelling mistakes corrected.

Next, Francine and Prunella make spooky noises through an air vent to frighten Mrs. Pariso. Several neighbors complain about the noise. Francine puts a fake spider over Mrs. Pariso's door. The next morning, it falls on Francine when she goes to school.

Mr. Frensky tells Francine that instead of grounding her again, he has accepted an invitation to tea with Mrs. Pariso on Francine's behalf. Francine tells her friends that she would rather eat dog food, but she goes anyway. Mrs. Pariso turns out to be a friendly old lady who used to be an Olympic rider and tennis player. That evening Francine tells her dad that she and Mrs. Pariso are like sisters, and that Mrs. Pariso was only mean because she was lonely.

Francine asks Mrs. MacGrady if Mrs. Pariso can join her bingo group. She organizes a welcome party at Westboro Apartments, takes Mrs. Pariso to the horse ranch and introduces her to her friends.

Some time later, the Frensky sisters hear loud music and laughter coming from Mrs. Pariso's apartment. Catherine bangs on the wall to no avail. She says that Francine created a monster, but Francine just smiles.

"Don't worry, she's an old lady, she won't even remember?"

"What have I told you about making prank phone calls?"

"Um...not to do it unless it was absolutely necessary?"

"Okay, okay, I know I shouldn't have, but she started it, she complained about my playing drums and she was banging on my wall and-"

"Francine Frensky, I don't care if Mrs. Pariso threw a water balloon at you, she is an elderly lady and you will treat her with respect." 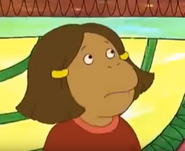 "That is so unfair, how'd she know it was you anyway?"

"You gotta do something, Francine, next you'll be arrested for watching TV."

"Maybe you can get her to move somewhere else."