"Francine Redecorates" is the first half of the seventeenth episode in the second season of Arthur.

Francine and her sister Catherine have to share a room. But how do you decorate when one person likes bats and lizards, and the other's tastes run to lace?

Francine starts the show by saying everyone has their own personalities: D.W. loves to sing to Crazy Bus, Muffy loves dresses and shoes, Sue Ellen offers advice on diaries and Binky likes macaroni-and-cheese. Arthur is interrupted by Muffy and isn't able to say what he likes. Francine doesn't reveal what she likes, because it's for her to know and "you" (the viewers) to find out.

After the title card, the Read family are having a yard sale, so Francine comes to their yard. Francine then gets a free red Ottoman (a footstool with a built-in foot-warmer and TV dinner tray) that was a wedding present that Arthur's parents received, but hardly used, and then Francine takes it to her apartment.

When Francine comes home, she shows Catherine the Ottoman that was previously owned by Arthur's parents. However, Catherine reacts and suggests that Francine should stop getting anymore "revolting junk".

The other three items Francine had brought into their room despite Catherine's objections included an ice cream cone lamp that she purchased from Tastee Cone shortly before it shut down, a volcano-like alarm clock which Catherine refers to it as an "ugly lava alarm clock", and a green reptile perched on a tree-like podium.

Catherine then shouts out that the madness should stop. However, Francine retaliates against her sister by calling her lacy stuff "ugly": lacy curtains, lacy plush cats, lacy pillows and lace around everything else including a roller chair.

The debate denotes the fact that Catherine is a "girly-girl" with feminine interests, while Francine's much more tomboyish and not into girly stuff like lace. Catherine states that lace gives a "unifying" theme to a room, but Francine gets back, saying that lace is rather a "nauseating" theme.

Catherine then calls Francine ignorant, but then Francine suggests that Catherine should wait until her feet get cold, and then she will "be sorry."

While their mother Laverne is working on the cupboards, Catherine suggests they should have a sign on their room door that would say "TOXIC TASTE DUMP". Laverne tells her daughters that their room is due for a paint job.

Francine suggests she wants red and purple, but Catherine suggests mauve and gray. However, Laverne thinks white would be a good choice, as this would allow the girls' interior design to be highlighted.

Francine then goes to her friends' residences to get design ideas for her room. She visits Muffy, Sue Ellen, and Fern, but none of their decorations are preferable to Francine.

Back at the Frenskys' apartment, the girls show Oliver and Laverne their drawings on what their room might look like: Francine suggests having a basketball hoop so she can shoot hoops from her bed, but Catherine suggests a flowery room with a grandfather clock that converts to a cot as a substitution for Francine's bed. Oliver thinks that the girls should combine their ideas and create a "fantastic" room. Catherine, however, doesn't want to "lower (herself) to (Francine's) level" and Francine complains that all her friends have their own bedrooms, and she can't stand sharing a room with her sister Catherine, thus calling her a "frillanoid." Catherine then agrees to move out of the room, and Francine decides she wants to move out also, but Catherine called it out first.

Catherine's bed and her lacy stuff get moved out of the bedroom she shared with Francine and into the living room, and a curtain is put on the line between two coat racks to make her bed and lace her own personal space. Catherine suggests it is like having a loft.

Laverne says that the living room sofa is not part of Catherine's room, but Catherine says it is "shared space" and "needs a unifying theme." Francine gets back once again by calling Catherine's lace bacteria that spreads everywhere and taunts "Lace! I need lace!" in an alien-like dialect and then heads to her room that she now has to herself.

Back in Francine's bedroom, all the lace is removed to please Francine, and it only has Francine's decorations and her bed in a now rather plain bedroom. However, the room appears to look larger than before, and the following sequences show her decorations being moved around. Francine then finds her room looking empty, due to its plainness and that only about a third of it looks occupied.

The next day, in Arthur's yard, Francine then reveals to Arthur that she now has her own bedroom, and Arthur says it is like Catherine has moved out of the house. D.W., who still shares her bedroom with her sister Baby Kate, suggests that she too should have her own room, so that Kate would not bother her anymore. She imagines the garage being her new bedroom. Francine tells Arthur her room looks too empty, and Arthur suggests she needs some more stuff.

Francine then goes to the Elwood City Dump and finds a discarded bat-mobile. Later at night, she shows it to Catherine, but Catherine objects once again and quickly heads back to her room, which is the loft.

Francine goes to bed and watches her bat-mobile spinning. She has a nightmare where the bats all come to life and form together into one enormous bat which swoops down on her. She wakes up and is relieved it was just a dream.

Then Francine helps Catherine move her bed and her lacy stuff into their "real" bedroom they both share. When Oliver and Laverne arrive home from the grocery store, they are surprised to see that Francine and Catherine have moved Catherine's stuff back into the bedroom. The parents then find out that Francine and Catherine finally agreed with combining each other's decorations, plus lacing some of Francine's items as well and having co-ownership of each other's possessions. 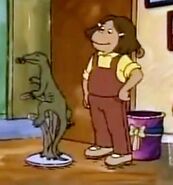