Francine and the Feline

"Francine and the Feline" is the second half of the thirteenth episode in the third season of Arthur.

Francine falls for a cute little kitten, only for Arthur to overreact and claim that cats are evil, which would cost their friendship.

Francine starts the intro by trying to choose which pet she would like, first a Komodo Dragon, then a Narwhal. Next, Buster goes on to say that he wants a Pterodactyl. Then, Arthur claims the only pet to have is a dog before he's interrupted by Binky, who claims to want an Ameoba. Arthur tries again, but Brain wants to talk about virtual hamsters. But both are interrupted by Francine who claims it's her intro and how Arthur keeps selfishly hogging it.

Francine and the Feline

At the junkyard where he works, Francine's dad finds a creature hissing at him during lunch. He comes home later to reveal his surprise, a kitten. Francine goes to pet him back Catherine interrupts and grabs him, nuzzling him and hugging him and so forth.

Both girls go on to argue about the cat and later Francine tells the guys about her new cat. Arthur claims they're smelly and mean, Brain thinks they're too cute, and Arthur tries to convince her that Pal, a dog is a perfect pet. Pal then proceeds to steal D.W.'s cookie and wrecks her tea party. Arthur however makes silly nonsense claiming that Pal was teaching D.W. not to leave her food lying on the ground.

Later, Francine comes in to see Catherine dressed up the kitten, who particularly didn't seem to like it very much. She then reveals his name "Rosepetal". Catherine then sees Rosepetal laying with Francine the following morning and accuses her of trying to steal Rosepetal's affection.

The cat is a bit wound up and Catherine does not understand as she tries to feed him. Francine, however, seems to be enjoying this behavior as she tries to catch up and play with him.

Later, Francine plays cards with the guys, and Brain compliments the intelligence of the kitty, while Arthur manages to upset/frustrate Francine to the point of leaving. Arthur does not plan on changing his mind anytime soon though and keeps calling the cats stupid while beginning to worry that she may end up getting a lot more cats.

Eventually, he imagines him and the cats licking his ears until seeing Francine suddenly turn "cat-like" when he snaps out of it. Later, Francine comes over and has Pal and Nemo meet.

Arthur tries to convince her that Pal doesn't need a cat for a friend, but he won't listen and keeps yelling at Francine because he thinks Nemo was trying to kill Pal. But he suddenly notices Pal is behaving weirdly.

Later, he goes over the story with Buster. Who claims Pal looks fine to him... The next morning, Francine shows Nemo to their friends at school. Arthur is even more spiteful of Nemo, now that he ate his lunch. Francine turns the tables on Arthur with the same weird nonsense he said earlier over D.W. having a tea party and Pal eating her food.

After school, Arthur still notices that Pal is behaving weirdly when the doorbell suddenly rings. Francine lets Nemo go play with Pal before asking Arthur what they should study for first. It's then Francine and Arthur begin to argue and fight.

The pets listen before Francine angrily storms out and slams the door. Arthur tries to figure out why Pal is so upset when he tells his dad what they were doing earlier and his parents reveal that the animals were playing, not trying to fight. And so Arthur, who refuses to listen, then goes to take Pal on a walk when he sees Nemo and Francine.

Nemo and Pal then proceed to unhook themselves from their leashes and run around, making Francine and Arthur chase them. Suddenly Arthur gets knocked over!

He begins to laugh as Nemo licks his ear and the two animals continue playing. Francine and Arthur resume arguing about which species of pet is better as both pets smile and simply watch their owners. 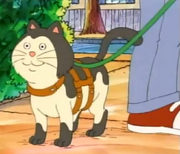