Fritz Langley is the former caretaker of the Elwood City Community Gardens. He suffers from arthritis and moved to a retirement community. He is friends with Buster.

He is depicted as a rodent with gray hair and a light brown complexion wearing khakis with a belt, a light yellow cargo jacket, brown sneakers, a green banded hat, and green glasses with no inside. In his youth, he had brown hair.

In "Buster's Green Thumb," before meeting Fritz, Buster described him as "the weird guy with the big hat who talks to himself." Bitzi, who knew Fritz since she was a child, tells Buster that he is not weird and convinces him to bring compost to the garden. Fritz does talk to himself as he pulls out weeds, saying things such as "You think you're tougher than me, eh? You put up a good fight, weed, I'll give you that." He is a very strict person, but means well and cares about the garden.

It was revealed in "Home Sweet Home" that in 1932, when he was younger, Fritz got the nickname Fearless Fritz after winning a game of capture the flag against all odds at camp. He writes about this in a letter to Buster when he is at camp. Buster reads the letters Fritz sends to Sanjeev, Irwin, and the other kids at Camp Meadowcroak. It was also that revealed prior to this event taking place Fritz wasn't very interested in camp.

Fritz as a child

Fritz in his other clothes 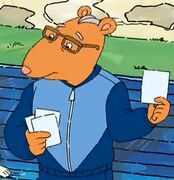 Fritz's exercise suit
Add a photo to this gallery

Add a photo to this gallery
Retrieved from "https://arthur.fandom.com/wiki/Fritz_Langley?oldid=401010"
Community content is available under CC-BY-SA unless otherwise noted.