"Happy Anniversary" is the first episode in the tenth season of Arthur. It is a two-part episode.

While they are on their way to celebrate the tenth wedding anniversary of Mr. and Mrs. Read, the Reads' van breaks down, stranding the entire family. Arthur and D.W. get locked in a diner storeroom, where they hear the inspiring radio tale of Crooning Cowboy Kid Carter and his little-sister sidekick.[1]

Mr. Ratburn shows a video on perspective in school. The class has to write essays on how the way you look at something changes the way you think about it.

Arthur and Buster are looking forward to the Bionic Bunny tenth anniversary special, which is supposed to reveal the connection between Bionic Bunny and Dark Bunny. They vow to have their essays finished before the special.

The day of the special is also the day of the Read parents' tenth (that is “tin”) anniversary. Arthur has bought his parents a card while D.W. has painted a picture on a pie tin. She is disappointed when Arthur informs her that pie tins are made of aluminum.

The parents are happy about both gifts, but D.W. promises them an official tin gift. The parents are planning to eat at a French restaurant in the evening, while D.W. will stay at Grandma Thora's house and Arthur will stay with Buster.

D.W. trades the Tibbles her Mary Moo Cow doll for a tin soldier.

Meanwhile, Arthur works on his essay at Buster's but he does not have a good idea. Buster wants to write about hunger making bland food seem tasty. He ends up eating his prop.

Brain tells D.W. that her tin soldier, though valuable, is actually made of iron.

Arthur works on his essay at home, but he still lacks inspiration. He has a dream in which he and Buster fight a huge origami figure made of his unfinished essay.

Just as the Reads are about to drop off the kids, Grandpa Dave phones to tell them that his car broke down and he needs a lift to the volunteer firemen's ball.

The whole family (including Grandma Thora) drives in Mr. Read's van. First they get lost, then the car breaks down in an area with no cell phone reception. Mr. Read, D.W. and Arthur walk back to a diner. It is closed, but a young employee named Jay lets Mr. Read use the phone. Meanwhile, Arthur and D.W. try out an old jukebox. The dime they meant to drop in rolls into a storeroom. The kids run after if, the door falls shut and they are trapped.

Mr. Read and Jay hear them, but only Jay's boss has a key to the storeroom. Jay fetches the other Reads, then leaves to get the key. He allows the Reads to help themselves to food.

D.W. starts to panic. Arthur tries to calm her down by telling fairy tales, but D.W. already knows them all. Instead she tells a Bionic Bunny story, in which Bionic Bunny and Dark Bunny are twins who were separated as babies by a witch and an evil robot. Arthur tells her to stop, because the idea is so dumb.

Just then D.W. accidentally turns on an old radio. The kids hear a radio play about “Kid Carter and his Sidekick Mistral”. In the play -which is shown with Arthur characters- Carter (Arthur) and Mistral (D.W.) chase the Burlap brothers (Tibble twins), who are in league with a corrupt mayor (Mr. Ratburn). The brothers trap Carter and Mistral in a mine. Carter finds a miner's hat with a lamp and they start looking for tools. They discover something, but just then the program ends.

Arthur uses lamps from his Bionic Bunny costume to look for tools and the kids manage to loosen the lock and get out of the storeroom. D.W. hands her mother a tin can, which is actually made of tin.

Just then Mr. Read calls everyone for a dinner which he has created from leftovers. They eat and dance to music from the jukebox.

In school Arthur reads his essay about the anniversary adventure, concluding that perspective means realizing that you are part of something larger, like a family.

Arthur asks Buster about the Bionic Bunny special. The revelation about Bionic Bunny and Dark Bunny turns out to be exactly what D.W. said.

A lesson in perspective

Elwood City from above

“The episode you’ve all been waiting for.”

"I hear the duck à l'orange is amazing."

“Only zee best for mon chéri.”

...right up the nose

"All set and with ten minutes to spare."

“Maybe they have a phone you could use.”

“It's part of my Laser Nostrils costume.”

"Who turned off the light?!"

“Arthur locked us in!”

“What kind of older brother are you?”

Bionic and Dark Bunny as babies

Kid Carter and his sidekick Mistral

“Why are you asking him?” 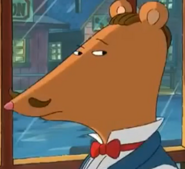