He Said, He Said

"He Said, He Said" is the first half of the third episode in the twentieth season of Arthur.

When an episode of Bionic Bunny is interrupted, Carl is the only one who can recall what comes next.

Bionic Bunny fights the plant-themed villain Dr. Sumac. When he wants to escape from a man-eating plant, Arthur and Buster, who are arguing about how the episode ends, block the way.

He Said, He Said

Buster, George and Carl are guests at Arthur's house. They make little figures out of Brussels sprouts for the Bionic Bunny special ‘Sumac No More’ which Arthur and Buster watch every year. Carl has only seen one Bionic Bunny episode and found it unrealistic.

Bud and D.W. are trying to build the highest Tower of Cows ever in the living room and refuse to leave. Right after the show's introduction, the TV goes black. Mrs. Read calls Elwood City Cable, but she is kept waiting on the phone.

Meanwhile, Carl has decided to help the little kids with their tower. Buster tries first switching the light on and off and then he tries pleading, but the TV remains black. Arthur begins to tell Carl what happens in the special.

The special begins with a little farm girl harvesting carrots and discovering odd tentacles on a cabbage plant. A tentacle grabs her and Bionic Bunny tries to get her free. Buster stops the story. He remembers that the little girl was working for Dr. Sumac, but Arthur claims that that was a different episode. Carl suggests putting a box lid on the Tower of Cows and stack more cows on top of that. Since they are out of cows, D.W. suggests continuing with building blocks. Bud wants to know how the special continues.

Buster tells how Bionic Bunny pursues Dr. Sumac into a corn maze. She uses a fluid which makes the corn plants attack Bionic Bunny while she escapes. Arthur stops him, because he remembers Bionic Bunny being attacked by poisonous vines. After Buster suggests that Arthur does not know his Bionic Bunny and Bud tells D.W. that he cares more about the special than about a “silly cow tower”, they all argue. George is worried that the yelling might cause Carl to have a meltdown, so he continues the story.

According to George, Bionic Bunny falls into a burrow and meets a badger, a toad and a mouse. The others stop him and Buster explains that those characters are from ‘The Breeze in the Brambles’. George admits that he has not actually seen the special. Bud jumps up and down in frustration, causing the tower to shake. While the kids hold it steady, Carl offers to tell Bud what happens in the special, which happens to be the one episode that he saw. He rattles off the whole plot including the commercial breaks while finishing the tower. Just as he finishes, the TV comes back on. Bionic Bunny throws his cape in front of the sun, causing Dr. Sumac to shrink, just like Carl said. Arthur and Buster are disappointed, but Bud tells them he liked their versions better. At D.W.’s suggestion, Mrs. Read completes the tower by putting a Bionic Bunny hat on top of it.

Main article: He Said, He Said/Gallery 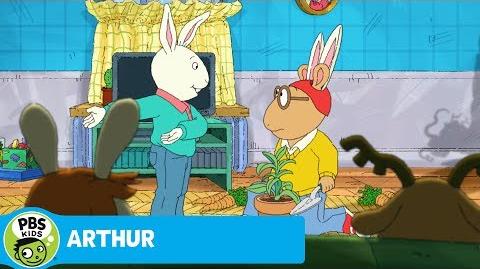