Henry Skreever (also spelled Henry Screever[1]) is a series of books written by J.R. Ticklepenny. It parodies the Harry Potter franchise. Most elementary school characters are revealed to be fans to some degree, especially Prunella and Marina.

In "Prunella's Special Edition", Prunella accidentally recieves a braille edition of Henry Skreever and the Cabbage of Mayhem, instead of a monogramed edition. Having to wait three weeks to get her copy, Prunella is constantly tortured by the fact that her friends are reading the book (and spoiling some parts). While trying to learn braille, she meets the blind girl Marina who offers to read the book to her. The two become best friends.

In "Prunella Sees the Light", Prunella and Marina are excited to see the movie adaptation of Henry Skreever and the Brick of Wonders. To celebrate, Prunella plans to have a sleepover with Marina the night before the movie premieres. Prunella starts to decorate her room to look like a room in Henry Skreever and the Potage of Villainy. After seeing the movie (Marina used a descriptive headset); Prunella thinks it is terrible with goofy looking special effects, Marina thought that Lord Moldywart did not look like she imagined, and they both thought the kid playing Henry was not a good casting choice.

According to the July 2007 newsletter, another book in the series is Henry Skreever and the Healthy 'Mallows, though it has not been featured in an episode yet.[2]

In "Prunella and the Disappointing Ending", the final book of the series, Henry Skreever and the Knights of the Bouillabaisse, is released and Prunella and Marina decide to read on a schedule so they can finish at the same time. Prunella reads a the first four chapters instead of the first three, and she gets criticized for it by Marina when she slips out a spoiler. Then Marina reads ahead then next time, and they end up arguing and betting over who could finish the book first. They both end up skimming the book and when neither one can answer basic plot questions about the book, they decide to read the book again, but out loud to each other this time.

The book cover of the text edition was dark blue and featured an illustration of a wizard named Henry Skreever and some magical flying cabbages. The braille edition was a blank cover in bluish-gray with a white stripe and its pages were full of raised dot characters. The seventh book has a purple cover.

Front cover of the text edition of Henry Skreever V and the Cabbage of Mayhem.

The braille edition of Henry Skreever.

The front cover of the third Henry Skreever book. 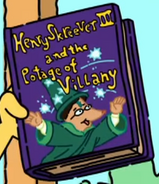 The front cover of Henry Skreever III and the Potage of Villany, as seen in Sue Ellen Adds It Up. 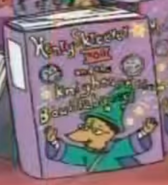 The front cover of the seventh book.

The opening title of Henry Skreever and the Giblets of Jeopardy. 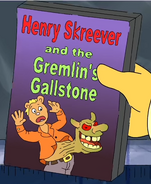 The DVD cover of Henry Skreever and the Gremlin's Gallstone.
Add a photo to this gallery

Retrieved from "https://arthur.fandom.com/wiki/Henry_Skreever_(franchise)?oldid=409531"
Community content is available under CC-BY-SA unless otherwise noted.