"How the Cookie Crumbles" is the first half of the twentieth episode in the second season of Arthur.

Muffy is having trouble coming up with a recipe for the Strawberry Festival contest. Her friends make a joke recipe, which turns out to taste good, and she enters it. Muffy wins the contest but isn't sharing the credit with her friends.

The episode begins with Arthur, Francine, Binky and Brain as cookies inside a jar. They climb on top of each other and try to get the lid open, to which they succeed and realize that they're cookies.

They try to get Muffy to eat some fruit instead, and tell her that it's not fair if they get eaten. Muffy replies that whoever owns the oven gets to make the rules, and "that's just the way it is." The cookies run away except for Arthur, who leans up against a glass of milk as the shadow of Muffy falls over him.

Arthur and D.W. are in the kitchen asking David what he's baking, to which he replies that he's baking strawberries for the Elwood City Strawberry Festival, which is one of the biggest holidays of that week.

Later on, Arthur, Francine, Muffy, Binky and Brain are walking by The Sugar Bowl, and Muffy notices a strawberry on top of the roof and asks if it's almost Strawberry Festival time. Arthur tells her that it's this week and she runs away home, worried.

Arthur wonders if Muffy hates strawberries, to which Francine reveals that the reason Muffy is so worried about the Festival is that she won last year; we see a flashback of the previous festival in which Muffy did win, but everyone wasn't happy because they believed that she only won because her father Ed Crosswire was the judge.

Back in the present day, Francine reveals that Muffy wants to prove that she won the contest fair and square, and that she must win again this year to prove it,but she doesn't have any ideas. Arthur, Francine, Binky and Brain go to Muffy's house to cheer her up and ask her what she is entering in the contest.

She says that last year, she entered butter cookies with a strawberry in it, and her friends throw in additional stuff such as peanuts, chocolate chips, peach slices, oatmeal, bananas, and a raisin. As the gang leaves, they feel very happy for cheering Muffy up.

Muffy's cook bakes the cookies that Muffy's friends made, but she tells him that they were just joke cookies and to throw them away. However, when she tastes one of the cookies she tells her cook not to throw them away, because they're delicious. At the Strawberry Festival, Arthur, D.W., Grandma Thora and Kate watch David in the Parade and Muffy winds up winning the contest with her cookies, which she calls Scrumptious Smackeroodles.

Later on, when Jane shows Arthur the recipe for Muffy's winning cookies, Arthur realizes that's the cookies that he and his friends helped Muffy bake. He asks to see where Muffy mentioned that they helped her bake them, but he finds out that she didn't mention them and took all the credit.

At the tree house, Arthur, Binky, Francine and Brain are mad at what Muffy did and go to her house to confront her, but her mom tells them that she's not there and that she's in town posing for "the bag."

The gang go to find Muffy at the camera shop, where the cameraman Carl tells them that Muffy is going to sell her cookies at the Sugar Bowl. At this, the gang try to turn on Muffy, but she complains that they are causing her to "wrinkle (her) nose" (an image that would not look good on the cookie package), so she has Carl shoo them out of the studio.

When Muffy comes out of the camera shop after having her pictures taken, the gang tell her that they helped her make the cookies, but she tells them that she bought the ingredients, she owns the oven, and that she entered the contest, and she also tells her friends that they're just jealous, to which Francine calls her a bigger rat than Ratburn.

At home, Muffy tells her cook to bake lots of cookies for her to sell at the Sugar Bowl. He says that he will, as soon as she gives him the recipe. Muffy reveals that she doesn't have the recipe written down, but that she could remember it, though. She tries to bake the cookies herself, but uses different stuff such as pineapple and apples, which makes the cookies taste like junk.

At the tree house, Arthur, Francine and Binky write out the recipe and plan to make their own cookies so they can drive Muffy out of business. Muffy appears and apologizes for what she did, and asks if she can have the recipe. Her friends give it to her and ask if she will give them credit, to which she says that she doesn't think that will be possible. She also says she had to win the contest, to prove that she won the previous one fair and square, and that nobody knows she had help baking the cookies. Before Muffy leaves, she asks if the recipe is right, and if they didn't put anything in it that would make the cookies "taste like junk". Arthur replies that Muffy can trust them because they're her friends. Muffy then thanks them and leaves.

Later on, Arthur, Francine and Binky are walking by the Sugar Bowl, refusing to go in there anymore because of the cookies being sold there. However, Muffy comes out with some cookies for her friends; on the bag, it says MUFFY & FRIENDS and the cookies are of Arthur, Binky, Francine and Brain.

Muffy tells her friends that she has learned that friendship and honesty are more important than winning a contest; she and her dad talked about it, and he said "a lie is a lie even when you get away with it", and that he won't stand for any lying.

Muffy and her friends then go into the Sugar Bowl to work on new recipe ideas for next year; Binky suggests, "Banana. Lots and lots of bananas." 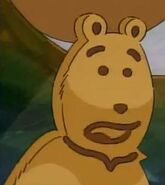 Part of the festival

David on a float 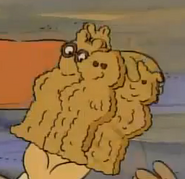