I Wanna Hold Your Hand

"I Wanna Hold Your Hand" is the first half of the second episode in the fifteenth season of Arthur.

During a shopping trip to the mall, Binky gets caught doing the uncoolest of all the uncool things in the world: holding his mom's hand!

Arthur talks to the viewers about outgrowing things. D.W. is sitting in a baby stroller and demands to be pushed. He pushes her against his will, and D.W. demands that he pushes her harder. Then she tells him to get her "baba" (baby speak for bottle). However, the bottle is empty and D.W. throws a tantrum. Binky runs to Arthur and tells him not to say anything else. He then yells at the viewers.

I Wanna Hold Your Hand

After the title card, Binky and his mom are seen walking in the Mill Creek Mall. They walk into a store called Jeff's Manly Wear and Binky tries on a variety of ties for his clarinet recital. He finds one that he likes and sticks with it.

Binky walks into Mr. Ratburn's classroom. Mr. Ratburn tells him that he has to sit in a baby highchair instead of his normal seat, claiming that "it's for little boys who still hold hands with their mommies!" The whole class laughs while Binky cries like a baby. Thankfully, this turns out to just be a nightmare, and Binky wakes up.

That morning, Binky wants to know where his tie is, since he wants to wear it. Mrs. Barnes asks him if he wants help tying his tie, but Binky denies the offer since he's "not a baby", but he can't tie it correctly. He keeps trying and gets frustrated. He ties it too tight and starts to choke. Binky's dad quickly unties it.

He wears his tie to school, and everybody notices. George walks over to Binky and gets alarmed when he sees the Tough Customers and walks away.

During lunch, Binky tries to look like an adult by reading the newspaper, drinking from a mug, and having a briefcase. Molly and Rattles walk over to him and tell him to "cut the act". Binky gets nervous and walks away. Binky runs into George at the hallway, and tells him to not say another word.

In the class, Mr. Ratburn asks one of his students to name the capital of Sweden. George knows the answer, but Binky looks at him and he gets nervous. George gets in trouble for not answering, and has to stay after class. Binky fears that George will tell Binky's secret now that he got into trouble because of him.

Later, George and Arthur are playing "Go fish" at George's house, but George isn't talking and is using notes instead. Arthur wants him to talk, but he won't. Binky rings his doorbell and George answers. George tries to shut the door, but Binky holds it open, giving George a flower and some raisins to apologize. However, after doing so, Binky starts to regret giving George the flower and raisins, fearing that George will tell Molly and Rattles. He goes back to George's door, begging him to please not tell his secret. Arthur almost hears Binky's secret, but doesn't. Binky grabs out a handkerchief, wipes the sweat off of his forehead, and walks away.

However, a small slip of paper falls out of his pocket. Molly and Rattles, who were hiding in a bush the whole time, pick it up and read it. The note says, "Music recital in the auditorium. Tomorrow at 4 PM." They then think that the music recital is the secret that Binky is hiding.

Binky performs at the recital, with Molly and Rattles being in the audience. Rattles cries from the performance and Binky gets a standing ovation. The two figure that that's not what he was hiding since he played amazingly. Alex is not standing up, and Rattles demands him to.

Binky's mother is proud of him, so she holds his hand. When Molly and Rattles see it, Binky lets go of his mom's hand since he's "not a baby," and he walks over to the two and tells them that they can call him whatever they want. However, they don't make fun of him for holding his mother's hand. Molly laughs because she thinks that it's a ridiculous thing to hide, since she also holds her mother's hand. Binky, Mei Lin and his parents then go out to Golden Panda Chinese Restaurant.

The episode ends with George still using notes. Binky tells him to stop and he finally talks. 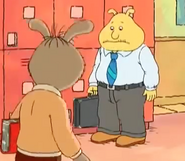 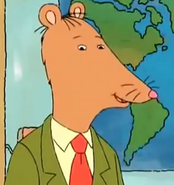