The Ice Cream Shop[3] (also known as the ice cream shop[4][5][6][7][8][9], Brain's mom's ice cream shop[10], or the Ice Cream Shoppe[11]) is an ice cream parlor in Elwood City. It neighbors Jack's Joke Shop and Meteor Comix. It is owned by the Brain's mother, Mrs. Powers. The Brain works there as her assistant, but Mr. Powers occasionally helps out there. It is a family-owned business and does not hire employees like The Sugar Bowl does. In "My Dad, the Garbage Man," Mr. Ratburn's class helps out Mrs. Powers during a field trip. The ice cream shop is four years old, as said by Brain in "Brain Freeze." In the same episode, its main competitor was Yumbobo.

One unique feature about the Ice Cream Shop is its invention room for ice cream. The special ice cream flavors are made in the ice cream invention room by sending small ingredients (such as candy and chocolate chips) from the top cabinet through the tubes and into the measuring glass, and popping out large ingredients (such as pizzas, bananas, and hamburgers) from the bottom cabinet, and by throwing the ingredients into the giant ice cream mixing bowl along with the ice cream mixes in different colors that come out of the tubes from the overhead ice cream mix machine that hangs over the bowl, and after being mixed go through the serving tubes (once a button is pressed) and into the cones and/or dishes. However, some special ice cream flavors have repulsed some of the people (with the exception of Buster, who seems to have no problem about it, as he is shown to eat almost anything).

The Ice Cream Shop was seriously wrecked by Hurricane Sadie. While the majority of Elwood City was spared serious damage from this hurricane, the hurricane's winds caused a tree to fall on the shop, breaking windows and causing other damage. Brain was shocked, as he had thought that he and his family had done everything they could to prepare and didn't realize that something like this could sometimes happen no matter how much they prepared. He began seeing a therapist and the Ice Cream Shop was closed for a time for repairs. The damage, fortunately, was fixable and the Ice Cream Shop was reopened in good time, with a celebration that included Brain, his therapist, and many friends. ("Shelter from the Storm") 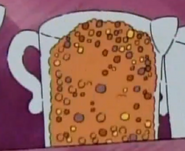 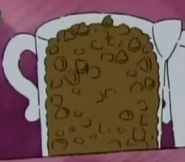 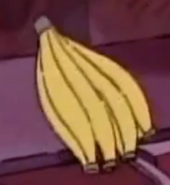