In My Africa (episode)

D.W. welcomes the viewers as she is walking through Dakar, Senegal, the hometown of Cheikh. D.W. explains that Dakar is like most cities, but is located in Africa. She briefly mentions how Arthur always speaks in openings, and never allows anyone else to do the monologue. She even refers to him as a "show hog." D.W. then introduces Cheikh to the viewers, and says that this episode is about him, but Cheikh tells D.W. that it is actually more about her and his cousin, Brain. Just before the title card, Cheikh kicks the soccer ball he has, which is revealed to be El Boomerang.

The scene then goes to Cheikh and his mother and father leaving Senegal to move to Elwood City, in the United States.

After that, the scene goes to D.W.'s preschool, where Cheikh is introduced to the rest of the class, but D.W. interrupts, saying that she already knows who he is, as Arthur had told her who he is, and then shows him a picture that she drew of what she perceives of his life back in Senegal.

Cheikh tells her that his life isn't like that, explaining that he's from a city (one that's much bigger than Elwood).Ms. Morgan tells D.W. that she should learn about a place before she describes it. Then the Tibbles make fun of D.W., saying she knows nothing about Africa. D.W. then vows to start learning more about the "country" of Africa, but Cheikh explains to her that Africa's not one single country, but rather a continent made up of a bunch of different countries.

Arthur explains to D.W. that it was hard for him to learn about Turkey, where his pen pal Adil comes from, and maybe she needs someone who understands more about Africa than she does, and then Arthur picks up the phone and calls his friend Brain (Cheikh's cousin), and Brain starts telling D.W. of ways she can learn about Africa, but his ways are too difficult, so D.W. suggests that maybe they should come up with a song about Africa, and they start singing. Then Cheikh comes in and helps with verses about foods from Africa, and the next day in preschool, the Tibbles think D.W. will humiliate herself, but Cheikh tells them that she won't because he will be singing with her, then they sing another verse.

After they sing the song, Ms. Morgan introduces a new student named Keith from Kalamazoo, and then when she asks if anyone knows anything about Kalamazoo, D.W. raises her hand and says she doesn't, but she would like to learn, finishing the episode. 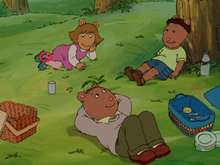 Main article: In My Africa (episode)/Gallery