"Invasion of the Soccer Fans" is the first half of the seventh episode in the twenty-first season of Arthur.

Kate is intrigued by the soccer game on the television.

Kate introduces another episode of Mashed Peas Theater. She begins with “It was a dark and stormy night” and Pal corrects her saying that it did not get dark and stormy until later. Kate continues that the episode features a magic spell, a TV and a bizarre ritual, and she argues with Pal, whether the nachos are important. Eventually, she gives up and Pal finishes the introduction.

Arthur, D.W., their dad, Grandma Thora, Vicita and Mr. Molina prepare to watch the women's soccer semifinals between the Crown City Cobras and the Sherwood Sharks in the Reads’ living room. While they are decorating the room with Cobras posters, Pal, Amigo, Killer and Kate wonder what is going on.

When the Molinas practice their Cobra cheer and everyone shouts advice at the players, the dogs are even more confused. They assume that the humans are under a spell. Then Kate becomes fascinated by the TV as well. Pal tries to get her attention, but she does not respond. Killer wants to bite the TV, but at Amigo's suggestion, they lick their owners instead. Kate briefly becomes normal, but then she is fascinated by a mascot dancing on the screen.

The dogs regroup behind the couch. They now follow Killer's lead and run barking at the TV.  Mr. Read and Mr. Molina bring the dogs to the kitchen. On the way out, Pal notices Arthur and D.W. fighting for the remote control. He suggests using it to break the spell.

The dogs leave by the doggy door in the back. Standing on Amigo's back, Pal can reach the doorbell and when Mr. Read opens, they run inside. Killer grabs the remote and changes the channel to the weather report, just as Alberto, who is in the stadium with his sports team, is seen on TV. The dogs hide under the dining room table with the remote and a plate of nachos, but Vicita notices Pal's salsa footprints on the floor. Mr. Read sends the dogs into the yard and locks the doggy door.

Pal looks through the living room window. A thunderstorm starts and a flash of lightning causes Kate to become normal. Then, a brief blackout occurs. Mr. Read accidentally unplugs the TV while closing the window, so when the electricity comes back on, the TV stays dark. Arthur brings in the dogs while the others wonder if the TV is broken. Pal notices the unplugged cord and the dogs discuss whether they should say something. The older humans all seem sad that the TV is off, and Kate promises that she will not look at the screen, so Pal barks and Arthur replugs the TV. Instead of watching the game, Kate watches the others cheer, which is more interesting. 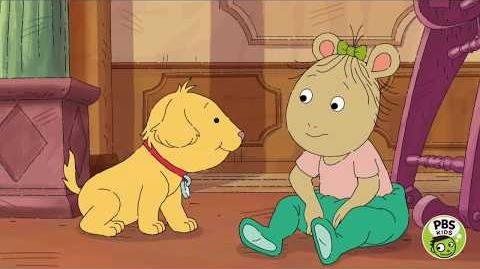