Is There a Doctor in the House?

"Is There a Doctor in the House?" is the second half of the eighth episode in the seventh season of Arthur.

Arthur and D.W. have to take on big responsibilities when their parents get sick: chores like cleaning, vacuuming, and even changing Kate's diapers!

Jane is being unusually clumsy, and the house is a mess. Baby Kate spills milk on the kitchen floor. Arthur can't find his softball shirt as it is still wet from the washing machine, so Jane allows him to take David's Parents' Day shirt. Finally, the dishes are a mess. Mrs. Tibble calls, and it turns out Jane had forgotten about D.W. being at the The Tibble twins’ house; as a result, she doesn't have time for her tea, which she pours down the sink.

Is There a Doctor in the House?

At dinnertime, Arthur is talking about his softball game; David's Parents’ Day shirt is lucky, and he wonders why Arthur was wearing his Parents’ Day shirt. D.W. is talking about how the Tibble twins are "selling" paper bag puppets that cost $19.95. Jane imagines all of them as clowns annoying her, and she has begun to develop bags under her eyes. She yells at everyone to be quiet. She then apologizes and explains how she hasn't been feeling normal all day.

David takes her temperature, and she has a fever. Arthur says that they will take care of everything. She goes to sleep.

It is the next morning and we see Jane in her robe. She goes down to the kitchen, where she observes the dirty dishes; sighing, she walks off. D.W. is worried that David can't handle cleaning the house himself.

Planning to do the laundry, D.W. turns to Pal, remarks that Jane always folds the laundry first before putting it into the washing machine, and does just that. Meanwhile, Arthur vacuums, although he is doing it in the same spot back and forth while watching TV. Arthur accidentally vacuums paper clips, keys and a sock; he observes smoke coming out of the vacuum and turns it off. Arthur and D.W. meet up, and Arthur says he finished with the vacuuming before asking D.W. how she's doing with the laundry; she says it's going great while bringing the laundry up the stairs. (However, the clothes are falling out of the basket).

Arthur and D.W. have ice cream in the living room; they consider the household chores to be easy. David arrives and notices that his shirt was buried; he, like Jane, has bags under his eyes. He smells something burning and Arthur tells him that the vacuum wasn't working. He tries to fix it while telling Arthur that he has to “pick up the big pieces by hand” before using the vacuum; he decides he'll fix it in the morning. After noticing that one of the cups isn't clean, he asks Arthur if he scraped the dishes and closed the little detergent door in the dishwasher, and Arthur replies, “Um, I’m not sure.”

Kate starts to cry and David changes her. He states that he doesn't feel so good, because he caught Jane's cold. When Arthur says, “Guess we didn’t do as good a job as we thought,” D.W. corrects him, saying, “You mean you didn’t. Daddy didn't say anything about the laundry.” After a second, Arthur and D.W. look surprised when they hear David angrily call “Who cut a hole in my pajamas?”

Everyone goes to sleep, and it is raining. A shadow appears near Arthur's door and it frightens him. It turns out just to be D.W. and her Mary Moo Cow doll. D.W. is scared of the storm and asks Arthur if she can sleep in his bed. Arthur allows her to.

D.W. worries about what will happen if David and Jane aren't better in the morning. Arthur says that Grandma Thora is coming, and that she'll help with the housework.

Arthur and D.W. have a dream where Arthur is in the catering business and D.W. is an accountant. When Arthur comes home, he calls for D.W., and she says she's at the computer. When she asks how the wedding was, Arthur says that he was fired again, and adds that “the catering business is tough when you only know how to make peanut butter and jelly sandwiches.” D.W. asks if he thinks being an accountant is easy when she can't count past 10 (although the page she was working on says otherwise, as it says “6+6=12”, which is the correct answer). When Arthur asks if their mom and dad are feeling any better, he and D.W. then look up at the ceiling when they hear them coughing hard and loud, and D.W. asks if that answers his question.

D.W. then says that she sent Kate to an orphanage, much to Arthur's surprise and horror. D.W. explains that Kate deserves to be in a place that can change her diapers. Arthur agrees and quickly changes sides. Expressing their regret at not paying attention to their mother and father's housekeeping skills, Arthur and D.W. say that they are terrible parents, and begin crying.

Arthur and D.W. both wake up simultaneously, and Arthur says he had the weirdest nightmare; D.W. agrees, saying “Me too.” Kate then starts to cry in D.W.’s bedroom, so they go in there. They have no other choice but to change the diaper themselves. After the nightmare they had, they become more informed about cleaning, start to get the hang of it and become responsible for their ages; they also make sure not to repeat the previous day’s mistakes and take their time with the chores instead of rushing through them (such as washing the dishes by hand instead of trying to load the dishwasher).

Grandma Thora arrives, and she is eventually surprised at them being so responsible. In the meantime, David and Jane become better, and Thora explains, “They folded the laundry, they emptied the trash and the house is spic and span” before adding “I don’t see why you two felt you needed to call in the reserves”. She then smiles when saying that Arthur and D.W. run a very tight ship. Jane remarks “I guess we trained them well” before giving D.W. a wink. David agrees while jokingly saying that they should get sick more often, which causes D.W. to laugh a little.

Arthur and D.W. then head into the kitchen; Arthur says that he's already tired even though it's not noon. D.W. agrees, saying that running the house is hard work, but at least there are only two sick people. However, Arthur then sneezes (showing that he's caught Jane and David's flu), and D.W. face-palms, saying “Oh, no”. Arthur uses a dishcloth to blow his nose. 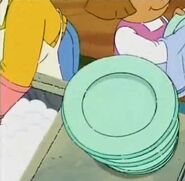 Arthur and D.W. do dishes by hand after the previous issue with the dishwasher. 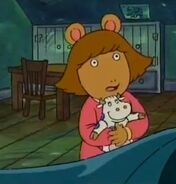 D.W.'s scared and wants to sleep in Arthur's bed. 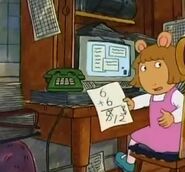 D.W. fantasizes about being an accountant, a terrible job for her because she can't do math. 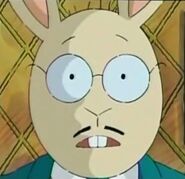