Start a Wiki
watch 02:32
The Loop (TV)
Do you like this video?
Killer is Grandma Thora's pet dog.

Since Killer has spent so much time in the pound, without a real home, she became aggressive towards other dogs. She scared D.W. when she startled her in the kitchen when they first met. Pal and Amigo were once afraid of her after she bit them. When Grandma Thora decided to keep her, she told her she needed to be nice to her grandchildren and other dogs if she wanted to stay with her. The other dogs were still weary of her however. Her reputation was saved when she rescued Nemo from a tree by barking at some firefighters on a rainy day. 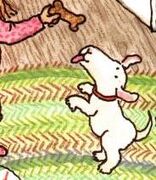 Killer's original appearance in the books.

Retrieved from "https://arthur.fandom.com/wiki/Killer?oldid=389006"
Community content is available under CC-BY-SA unless otherwise noted.