"Kiss and Tell" is the second half of the ninth episode in the eighth season of Arthur.

After Emily brags about being turned into a princess because of a boy's kiss, D.W. tries to make James MacDonald kiss her.

The introduction parodies the balcony scene from Romeo and Juliet with D.W. as Juliet, waiting for Romeo while speaking in Middle English. When her nurse, Nadine, comes to check on her, D.W. gets impatient over waiting for Romeo. A young man climbs up the ivy, only to realize this tower belongs to Juliet and not Rapunzel, causing him to try and leave by climbing down the ivy, but loses his grip on it and falls to the ground. D.W. shouts in frustration about where her own Prince Charming is.

Emily has returned from a trip to Paris and tries on a new hat in favor of her old beret, which she gives to D.W. Emily shows off her souvenirs from France and recalls the time she spent hanging out with with a French boy named Pierre. D.W. attempts to tell Emily a story of her and Tommy Tibble doing cannonballs at the pool, but Emily interrupts and reveals that Pierre kissed her hand. She happily reflects how the kiss turned her into a princess in a fairytale. Surprised, D.W. wants to experience it and amidst Emily's explanation about amour (love), decides to find a prince of her own.

At home, D.W. talks about it with Nadine. She has kissed her family, but only kissing a boy her own age will turn her into a princess. The Tibble twins overhear D.W. talk about wanting to kiss a boy. They can't decide whether this is because of a dare or if D.W. wants to get rid of her cooties, but when she approaches them and asks what they're doing, they become horrified and run off.

At preschool, Ms. Morgan asks what music the kids want to listen to at nap time. D.W. suggests "Sweet Dreams with Mary Moo Cow" while Emily offers a CD of "Alouette". The kids vote in a tie, which is broken by James, who votes for D.W.'s choice, much to her delight. At nap time, D.W. tells Emily she has decided to kiss James. However, Emily warns D.W. that the boy has to kiss her, otherwise “something terrible might happen.” D.W. has a fantasy of kissing James and turning first him, then herself into frogs.

D.W. asks Arthur about kissing while he's doing homework and finds his copy of Romeo and Juliet. Arthur gives her a brief summary about the story and mentions that Romeo and Juliet kiss at a ball in disguises, giving D.W. an idea.

The next day at Elwood Community Preschool, D.W. puts on a disguise and introduces herself to James as "Nora". However, James thinks it is show and tell day.

While shopping with her mother, D.W. and Nadine talk about her failure. D.W. sees a western movie in which a hero rescues a damsel from getting run over by a train, who she then kisses out of thanks.

D.W. watches Mrs. Read come home from a long day of shopping at the supermarket with a crying, exhausted Kate. Mr. Read takes Kate and kisses his wife.

In preschool, D.W. stages a similar scene with her Princess Sneeze-and-Wet doll, returning to her table from the cookies and milk line. James pays no attention to her until she stumbles and falls. Fed up, D.W. tells him that she just wanted a kiss, but she chose the one kid who didn't even notice her. James kisses her on the cheek, then goes to get his cookies off the radiator. Stunned, D.W. realizes she is still herself.

After school, Emily congratulates D.W. on being kissed by James on the cheek. She offers D.W. her new hat, but D.W. doesn't feel much different. In the meantime, she would rather do cannonballs with the Tibbles. However, when D.W. asks if they're going to the pool, the twins run away in terror again. A confused D.W. chases after the Tibbles, yelling what's wrong with them. 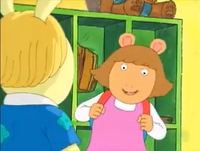