Start a Wiki
watch 01:48
The Loop (TV)
Do you like this video?
"Kung Fool" is the second half of the second episode in the thirteenth season of Arthur.

Fern helps an elderly neighbor, who was once a kung-fu star, with his household chores.

Arthur starts the show by saying you think you know someone, but suddenly they do something that surprises you. Arthur gives out two examples: how D.W. liked Dad's green Turkish food to Arthur's surprise the other night, and Mr. Haney who performed the theremin while balancing plates at the faculty talent show. He is about to give a third example, when Fern shows up doing kung fu. Arthur was surprised at Fern being into martial arts. Then she quoted an ancient proverb, bowed, and left. Arthur asked the viewers what that meant. Then he shows them the story.

Fern volunteers to help out a senior citizen named Tony Wu in order to earn her Jr. Explorer's badge. She initially finds him quite boring, but when she tells Sue Ellen about helping Tony Wu at school, Sue Ellen shows Fern one of the movies he starred, entitled "Master Wu and the Rebel Monks". After Fern finds this out, she treats him like her kung-fu master. However, he takes this as a joke and asks her to file out letters from fans. She figures it's for her training to become a martial artist, so she does chores around his house with pleasure.

He thinks this is a joke, which made Fern disappointed. So he promises her to teach her a little about his form of martial arts in his living room. Fern doesn't understand why she was making him doing simple things like standing up straight and focusing. Fern suggests they go to the park. Tony doesn't want to at first, but soon agrees. While practicing martial arts there, three other people join in to learn Tai-chei. 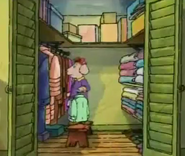 Retrieved from "https://arthur.fandom.com/wiki/Kung_Fool?oldid=389010"
Community content is available under CC-BY-SA unless otherwise noted.