Lakewood Elementary School is a public elementary school in Elwood City which was founded in the 1950s.[1] It is one of the fifteen schools in the city.[2]

Lakewood Elementary School appears to be a kindergarten to fifth grade school that includes hallways, offices, classrooms, a cafeteria/auditorium, gymnasium, restrooms, and other various maintenance rooms and other areas that are typically found in elementary schools. There is notably no school library, except for a small computer/library room which is donated by Ed Crosswire.[3] The teacher's lounge is generally off-limits to students, but it is stocked with snacks, coffee, magazines and a television and is furnished with comfortable seating for teachers and staff.

Mr. Ratburn's classroom appears to be typical of many other classrooms in the school. Four desks are arranged in pods, with as many as four desk pods in a single classroom. Other classrooms have the desks separated. The surrounding walls are covered with bulletin boards, chalkboards, and a world map, with large windows on the exterior walls.

Both the boys' bathrooms and the girls' bathrooms have counter sinks and toilet stalls while the boys' bathroom also has urinals. The exterior grounds include a playground and a baseball field. There are also bicycle racks immediately in front of the building for students who ride their bikes to the school.

The name of every student in Mr. Ratburn's class.

Back corner of Ms. Velez's classroom 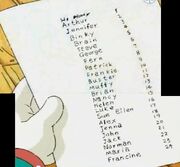 Marbles is played by everyone at the playground.

Teachers with known grade levels are listed below.

Note: Mr. Rambacher is an eighth grade teacher[11], but it is unclear if he works at Lakewood, being an elementary school.

The students below are grouped into their grade levels during Arthur's third grade year (i.e., prior to "Arthur's First Day") unless noted otherwise.

The following students have only attended kindergarten at Lakewood in "Arthur's First Day."

The following students are only known to have attended fourth grade at Lakewood in "Arthur's First Day."

In "Arthur's Number Nightmare" a seating chart for each class of the school is seen. It reveals unnamed characters whose names are below. Their grades are also unknown. Note that none of these characters are in Mr. Ratburn's class. The name Frances appears in the episode, "Castles in the Sky." It appeared on a posted note underneath a bowl of oranges. The note said "Vote Frances for Student Council" The name Frances appeared prior to the episode "Arthur's Number Nightmare." A few more names were revealed in the episode, "Grandma Thora Appreciation Day."

There are numerous other named students as seen on the class lists from "Arthur's First Day;" however, many of these names are production staff for the TV series. It is unknown if they are actually tied to an existing background character model.

They might have a Football team because in "Arthur's Baby" Arthur, Binky and other characters are playing. It appears that Mr. Marco is their coach. The students also compete in a bowling tournament against Mighty Mountain in "Francine's Split Decision". They have even played Jai Alai against Mighty Mountain (mentioned in "Francine's Split Decision").

Lakewood Elementary has hosted many events and festivals.

Lakewood Elementary occasionally holds contests to allow students to show off their abilities. Sometimes, these contests advance students to a greater level of competition, such as the checkers competition in "A is for Angry."