Dr. Martin Spivak is a forensic speculographist who was the host of the television show The Factoid Front.

On the way to the radio quiz show, George and his mother rode on a bus with Martin as a fellow passenger. "Fifteen"

Martin was the host of The Factoid Front, which Buster and Mr. Morris watched often. Shortly after an episode about a megatoad living at Lake Shagamonk, the show was cancelled. "Buster Isn't Buying It"

Martin likes his coffee black with five sugars. While on the phone with a client, he referred to himself as "Marty Spivak".

Martin on the far right 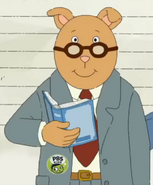