Mary Moo Cow is the main character of the television show of the same name. She is played by Patty Jones.

She has two horns and is white with purple polka dots, though in the books, she appears purple with pink dots. She also has pink nostrils and hands/hooves with two fingers on each. 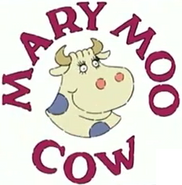