Millicent is a monkey who is depicted with a pale complexion, short auburn hair, a green headband, a pink shirt with a row of three buttons and a fish symbol, turquoise shoes, and a yellow wristwatch.

Her original design was seen in a Crosswire family portrait inside of a tent at camp on a page in Arthur Goes to Camp, first published in 1982. In her original design, she had short brown curly hair at the top of her head, brown monkey fur, and was wearing a gray blouse and a necklace. She was absent for over 10 years and was brought back in the cartoon in Season 1, and completely redesigned.

She loves shopping, but in the episode "Lights, Camera, Opera!," she says that she likes opera even more.

Millicent does not have her own personal job, although she enjoys helping out her husband at Crosswire Motors and also enjoys being the hostess of fancy parties at the Crosswire Estate. 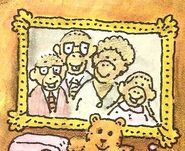 Millicent (second from right) in the book Arthur Goes to Camp 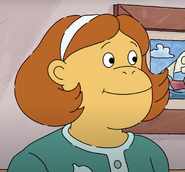 Retrieved from "https://arthur.fandom.com/wiki/Millicent_Crosswire?oldid=478796"
Community content is available under CC-BY-SA unless otherwise noted.