"Mind Your Manners" is the second half of the second episode in the eleventh season of Arthur.

The Tibble twins want to take their grandmother out to dinner to celebrate Grandparents day, but she would rather stay home. Could their table manners have something to do with her turning down their invitation? Can the Tibbles learn to behave at the dinner table?

The opening begins as Grandma Thora calls the Tibbles' grandmother to come to the movies with her, but seeing how troublesome Tommy and Timmy are, she isn't too sure about it. She is given advice to visit an "extreme babysitters" website, but this proves to be difficult, as Grandma Tibble is unable to find just the right babysitter. Grandma Tibble calls Thora to say that she will be staying home that evening.

D.W. and Emily are setting up their farm, when suddenly, Emily pulls out a weird doll. She explains what sort of creature it is, and explains that she got it from Circo de la Luna which her family visited on Grandparents Day. D.W. begins to talk about the card she made for Grandma Thora. Timmy and Tommy then appear and begin to roll around in the sand and dirt. As a result, they ruin the girls' structure. Then D.W. and Emily ask the boys what they got for their grandmother, but the twins completely forgot. Emily suggests that instead of doing what they want, the twins should do something their grandma would like.

As they roughhouse at home, they suddenly stop upon seeing a commercial for a fancy Italian restaurant, and believe this is the right place to take their grandmother. Choosing to surprise her, they wake her loudly, startling the old woman as they try to give her breakfast in bed — only to end up spilling a lot of milk.

After the twins inform her of their plans, she is quick to point out that their previous time out didn't really end well, and thinks this is a bad idea: they are too badly behaved to eat out.

In class, Tommy and Timmy explain what happened to D.W., and they have no clue why she turned it down, until D.W. points out that the both of them are slobs. She then explains how table-manners work and they ask her to teach them how manners work. However, D.W. refuses, and the Tibbles try to teach themselves. They practice pulling out chairs, pouring juice, and serving food before they eventually get into a small food fight.

On their walk home with Molly and James, the twins continue to roughhouse, when Molly assures James that she'll watch over them. While at the Sugar Bowl, the Tibbles begin to yell, and an angered Molly tells them they are leaving now. She then lectures the two of them, telling them that they have to be polite and think of what others would like. She then demonstrates by opening the door for a woman, and tries to give the Tibbles some advice on how to properly behave.

At the library, both Timmy and Tommy begin to fight over a book loudly until they remember Molly's rules, and they proceed to quietly fight over the book. Then later, Tommy helps Grandma by opening the door. Then, upon remembering to be polite, they try to eat with their manners in place. Some time later, the Tibbles ask their Grandma if they could get a drink and they suggest a restaurant nearby. They manage to convince her, although she is still very hesitant.

Once inside, she mentions how quiet they are being and asks them if everything is okay. Timmy accidentally knocks over his drink. Tommy is about to retaliate by pouring his drink over his brother's head, but suddenly remembers his manners and tries to help him clean up instead.

Mrs. Tibble then allows the twins to take her out to dinner and they go to a medieval-themed restaurant. However, upon noticing the lack of forks and knives, Timmy and Tommy ask their grandma if it's really okay to eat without utensils. She explains that she feels this would allow them to relax a little bit, and the boys chow down as the episode finishes. 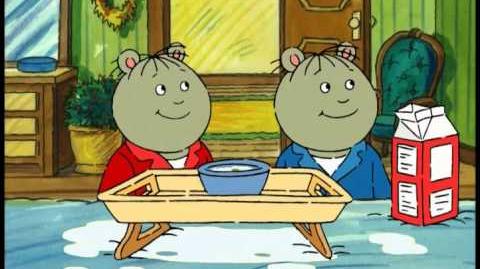 “Hey, is that our new babysitter?”

Pretending to be Grandma

“We all scream for ice-cream!”

“…someone shouting next to you…”

Fit for a King