Monique, commonly known as Mo' or Cousin Mo',[1] is Arthur's oldest cousin. She appears in "Arthur's Cousin Catastrophe" at the Read Family Reunion, and later makes a cameo appearance in the background of "Phony Fern" and "The Curse of the Grebes" (along with other non-noted ones). In "Arthur's Cousin Catastrophe," Arthur remembers via flashbacks how she had apparently been mean to him when she attended their past family reunions. She did things such as spinning him on the lawn sprinkler, doing judo on him, and dressing him up as a baby.

However, at the reunion in "Arthur's Cousin Catastrophe," she is much nicer to him. After seeing Arthur play piano at past reunions, she decided to learn how to play. She also reveals to Arthur that he's her favorite relative and that the only reason she comes to the reunion is to play with him, especially on the piano.

Mo is depicted with a tan complexion, moderate scarlet shoulder-length hair and parted bangs, and wears a white shirt with a red R + R design on the front, a bluish-gray denim jacket with front pockets, bluish-gray pants, and black sneakers with white accents. From the past reunions: she wore her hair in pigtails and straight-down bangs and was wearing a bright green shirt with buttons, bluish-gray shorts, white socks with bright green loops, and pale-red sneakers when spinning Arthur on a lawn sprinkler; her hair was shoulder-length and straight-down bangs, and she was wearing a white martial arts uniform with a yellow belt when doing judo on Arthur; and her hair was slightly longer than at her shoulders, and she was wearing a yellow shirt with purple overalls when she dressed Arthur as a baby. After those three reunions, her voice has grown somewhat deeper. 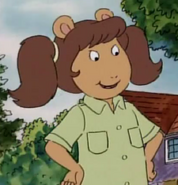 Monique from three years ago

Monique from two years ago 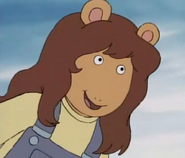 Monique skateboarding and on her phone

Monique with her little sister