Start a Wiki
watch 01:48
The Loop (TV)
Do you like this video?
Mr. Melt is a heat-themed villain that appeared in Arthur's dream in "Prunella's Prediction." He hates ice and snow, and was also resentful over not being invited to the skating party, so he used his heat vision to melt the ice skating rink while Buster, Brain, Muffy, and Francine were still on it. He was then defeated by Mr. Puffy, who belly-bumped him into the lake, extinguishing his fire. 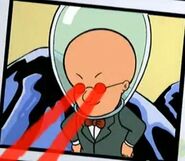 Heat vision.
Add a photo to this gallery
Retrieved from "https://arthur.fandom.com/wiki/Mr._Melt?oldid=364601"
Community content is available under CC-BY-SA unless otherwise noted.