Mr. Ratburn and the Special Someone

"Mr. Ratburn and the Special Someone" is the first half of the first episode in the twenty-second season of Arthur.

The gang is surprised that Mr. Ratburn is getting married.[3]

One of Mr. Ratburn's usual pop quizzes for the class is interrupted by a phone call from someone named "Patty," who’s calling to discuss flower arrangements for something. Mr. Ratburn apologizes to the class, explaining that the call was for a wedding. When Muffy asks who‘s getting married, Mr. Ratburn answers, "Me." The class gasps in surprise.

Muffy, Arthur, Buster and Francine discuss the news at the Sugar Bowl, surprised that Mr. Ratburn has a life outside the school, as they wonder who would marry Mr. Ratburn. Their question is seemingly answered when Mr. Ratburn walks in with a woman named Patty, who’s shown to be a stickler for perfection. She claims that Mr. Ratburn is too "soft" and that she will toughen him up. While Arthur remarks that they don't really know what Patty is like, the others insist that they need to split them up because a tougher Mr. Ratburn would be unbearable. Muffy uses an app that turns a picture of Mr. Ratburn into an animated hippie. Buster and Arthur then trick Mr. Ratburn into making a recording of him reading a children's book, which they sync up with the app and give to Patty. Unfortunately, Patty just finds the video hilarious.

The kids move to plan B, where they try to set Mr. Ratburn up with Ms. Turner the librarian. Arthur and Francine stop at the gourmet chocolate store Patrick's Chocolates, where the friendly owner Patrick gives them some free samples. They decide that the chocolates are perfect to give Mr. Ratburn to make him fall in love with Ms. Turner. Patrick hears their plan and remarks that chocolate doesn’t necessarily make people fall in love, but he goes along with it when Francine and Arthur claim they are desperate. They try to lure Mr. Ratburn to the library with chocolate and non-alcoholic champagne, but he is too busy with wedding preparations. He then asks them to return a library book for him, Love Poems by Pablo Neruda. This gives Muffy the idea to write a love poem "from" Mr. Ratburn to Ms. Turner. Ms. Turner isn't fooled, however, and returns the poem with corrections to Muffy's bad spelling and grammar (and a how-to guide on writing love poems).

The kids soon learn their families are all invited to the wedding. As a last resort, they choose to object during the ceremony. When they arrive, however, they begin to realize that Patty's duties don't seem consistent with that of a bride's. When Patty observes that they want to say something, the kids change their minds about objecting and compliment the wedding tent. Patty thanks them, but remarks that nothing would have really been good enough for her younger brother's wedding, revealing that not only is not the bride, but that she's Mr. Ratburn's sister (and the officiant for the wedding). The kids are surprised to learn this and, after questioning who Mr. Ratburn's getting married to if Patty isn't the bride, they discover that their teacher is actually getting married to a man—Patrick, the chocolatier they met earlier—and not a woman, after seeing the two of them walking down the aisle arm-in-arm. But instead of being shocked, they are pleased, as Patrick is a friendly person.

The kids enjoy cake after the ceremony and remark that they are happy with how the wedding turned out, and that it is a brand new world now that Mr. Ratburn is married. However, observing Mr. Ratburn and Patrick having their first dance, they all agree with embarrassment that teachers should never dance.

Somewhere around the same week that the episode originally aired, Alabama Public Television's director of programming, Mike McKenzie, commented, "The vast majority of parents will not have heard about the content, whether they agree with it or not. Because of this, we felt it would be a violation of trust to broadcast the episode." Then, McKenzie pulled and banned the episode from APT (Alabama Public Television).[4][5]

GLAAD (Gay and Lesbian Alliance Against Defamation), however, argued that "[w]ith LGBTQ visibility at an all-time high on television, including in the Kids and Family Programming genre, this attack to censor content is not only mean-spirited, it’s a losing battle. The uptick of LGBTQ characters and stories on kids TV shows has been met with praise from families of all kinds, and media need to put context to the extremely fringe anti-LGBTQ organizations and individuals who speak out against any inclusion. TV worlds often reflect our actual world and today that includes LGBTQ parents and families. LGBTQ parents and their children deserve to see themselves reflected in media and if leadership of this public broadcasting station cannot serve the interests of the entire public, it's time to find someone who can."[6]

The First United Methodist Church, located in Birmingham, Alabama, hosted a wedding party on June 15, 2019, while screening "Mr. Ratburn and the Special Someone" episode. The director of the festival, Rachel Morgan, got permission from WGBH to screen the episode at the wedding party. Morgan, when hearing Alabama's decision, stated, "personally, I was in disbelief and a little ashamed for our state. With all due respect to Alabama Public Television, it simply doesn't speak well for Alabama on a national level to censor such content. It made me sad, mostly for the message that it potentially sends to children -- that the lives of members of the LGBTQ community don't deserve the same representation as others."[7] 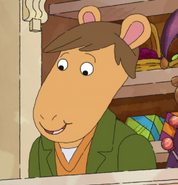 Inside of Patrick's Chocolates