Mrs. Fink is a third grade teacher at Lakewood Elementary School. Like Miss Sweetwater, she takes teaching to a fun degree and being in her classroom seems to be far easier than being in Mr. Ratburn's classroom.

She knows how to play the guitar and is the only third grade teacher who was married before Mr. Ratburn got married.

She was mentioned in the early books, but didn't appear as a visible character until the cartoon show. She's rarely seen compared to the other third grade teachers. 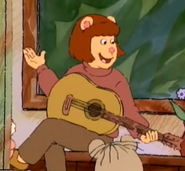