Mrs. Lancaster is a librarian who works at Elwood City Public Library alongside Ms. Turner.

In "Arthur and the Real Mr. Ratburn", she jumped back in fear upon discovering Arthur and Buster hiding in her book cart.

The librarian also appeared in "Meek for a Week," where she was shown as a resident of Westboro Apartments. She is seen as one of the residents who come to the roof to complain about Francine's loud drumming. In this appearance, she is in her pajamas.

She has a speaking role in "Arthur Makes a Movie" where she was locked out of the library's computer network system. Neither she nor Miss Turner could regain control because The Brain accidentally hacked into the system, which included access to the electrical circuitry. 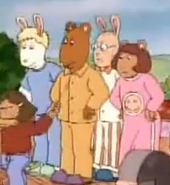 Halloween costume
Add a photo to this gallery
Retrieved from "https://arthur.fandom.com/wiki/Mrs._Lancaster?oldid=366981"
Community content is available under CC-BY-SA unless otherwise noted.