Mrs. Powers is the Brain's mother, and wife of Mr. Powers, and the proprietor of her ice cream shop in Elwood City.

Mrs. Powers is a bear who has a brown complexion and brown curly hair.

Her appearance was changed during the second half of Season 2 (although her changed appearance was first seen in "Arthur Goes to Camp" and again in "Arthur Makes the Team" from Season 1, but did not catch on at that time). This altered appearance, which lasted through Season 15, depicted her with a pale complexion and blonde curly hair.

Beginning in Season 16, her design was reverted to the original design with a slightly elongated face shape.

She also originally wore a uniform that represented her ice cream shop but dressed casually in the later seasons, especially at work. Her original casual clothing consisted of a white shirt, a pink cotton jacket with red accents, purple pants, and light pink shoes. Her current casual clothing consists of a pink shirt, purple shorts with a pink belt buckle, and light pink shoes with strings.

She is kind and friendly to everyone and gave them a thorough tour of how they make ice cream. One example of her generosity is in The Wheel Deal, when she noticed that the door for her shop wasn't wheelchair accessible she had it fixed so Lydia Fox and Alan (at the time) could go into the store with their wheelchairs. Her son, the Brain is her assistant at the ice cream shop. 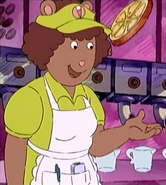 Mrs. Powers in her second design since 1998.

Mrs. Powers and her son talking.

Mrs. Powers reverted to her original design (circled in red; click to enlarge)