"Muffy's House Guests" is the first half of the third episode in the twenty-second season of Arthur.

Muffy is terrified when peregrine falcons build a nest outside her bedroom window.

In the introduction, Muffy’s friends play in the Crosswires’ pool and Muffy explains how she gets house guests to leave. First, she offers free ice-cream at the Sugar Bowl. Then, she tells them that Bailey is ready to take them home. When the others ignore her, she drains the water from the pool.

Brain follows a peregrine falcon to its nest, which is on the balcony of the Crosswire mansion, right outside Muffy's bedroom. Francine and Sue Ellen follow Brain and are fascinated by the birds. Muffy, however, is terrified and wants Bailey to remove the nest. When Mr. Crosswire arrives, he takes Muffy's side, while Bailey, Francine and Sue Ellen point out that the falcons are endangered. Brain calls Wildlife Rescue and Rehabilitation and tells the others that it is illegal to touch the nest of a peregrine falcon.

That night, Muffy closes the curtains in her room because the birds bother her. A bird screech makes her flee from her room.

The next morning, when Francine picks up Muffy, something falls on Muffy. Muffy panics because she thinks it is bird poop, but it is egg shells because the chicks are hatching. Francine calls Mr. Ratburn.

Soon, the Crosswire's driveway is crowded with people, including the news. Muffy wants her dad to do something, but he puts on his duck costume and uses the publicity to advertise “cheep” cars. Muffy decides to take matters into her own hands.

Muffy tries to lure the falcons away by tying a dollhouse on the limousine. When she waves a toy mouse to attract their attention, one falcon dives at her and Muffy falls in the mud.

While Muffy is recovering, Brain asks her why she is afraid of birds. Muffy tells him, how on her fourth birthday, she was freaked out by two people in goose costumes at a restaurant. Brain suggests that she familiarize herself with the falcons.

Muffy looks out of the window and agrees that the young birds are cute. She is a bit frightened when the mother returns, but then throws a shoe at a raccoon to protect the chicks.

Six weeks later, the Crosswire driveway is crowded and Muffy and her dad charge money for binocular rentals. The young falcons fly off and Muffy shows her friends a Picturegram account on which other birders can update her on the birds' progress. She is also thinking of adopting a canary. 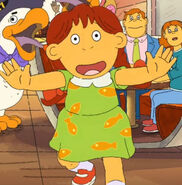